Is The Night Alive?

So between the Liberation, the description of the Night Whisper, certain cryptic comments by the Boatman and a few interactions in the Wastes of the High Wilderness in Sunless Skies, I can’t help but ask: is the Night something sentient, sapient? Are the Judgement doing something more than enforcing their will; are they containing something else? Is the Liberation not merely a figurative description for revolution but a literal escape of living darkness from the confines of law?

The Night is not as far as I am aware a sentient/sapient being. The Liberation of Night is, ultimately, the absolute destruction of light. The stars, named Judgements, are the gods of the universe. Killing them all would permanently extinguish light and &quotliberate the night&quot or create a dark world without the Judgements or their oppressive laws.
We don’t know if they’ll actually succeed, but their first objective is the Neath, which would involve blowing up (and hence killing) the Bazaar.
edited by Vincent Asmund on 5/18/2020

In Sunless Seas, it is said that in the Neath, light is the absence of darkness. So we know that darkness is a concrete thing. Just with this fact, I think it kind suggest objection to the opinion of Mr Asmund, thought it does not disprove them. If we assume that darkness is a thing, it become a possibility that the Night is sentient. More research is needed.

Given how sinister the forces working towards the Liberation are, I would not be surprised.

Heavy spoilers: Liberation is sponsored by sable suns, The Halved (ex-King That Warred) in particular. They &quotliberate the night&quot by emitting some sort of anti-Law, which actively corrodes Laws already in place. Liberated Night is a state of the world where existing Law is destroyed and new one is not produced, and not an entity itself.
edited by Aro Saren on 5/20/2020

In the part 5 of the episode 6 of the Failbetter Games Podcast, Cash Decuir talks a bit about one of his story, The Persona Engine, and talks about the Discordance, and he’s this to say: &quotSo the correspondence is the language of the star […] but where there is noise there is silence and in that silence, there is the Discordance, there is another language in that silence […]&quot He also make it clear that he is not talking about Parabola. If we take is talk of silence to its logical conclusion, the Discordance might be the language of darkness. So that might be something to explore, if we want to find out more about Darkness. Also, in that same podcast, Cash sings a shanty, so it’s very important the you watch that.

Yes, Discordance was mentioned in Persona Engine, written in Horizon Glyphs. IIRC it was required for formulating and solving equations of Red Science, and being opposite of Correspondence, it makes your eyes and brains freeze, down to absolute zero, which is why Babbage had to use the machine made of nevercold brass.

The Bazaar itself, interestingly is specifically described as “Night’s Courier”. Courier is what it is of course, its species. But why specifically “Night’s”, I wonder.

I suspect that has to do with its ability to traverse the Graveyard of Stars.

This should be it! 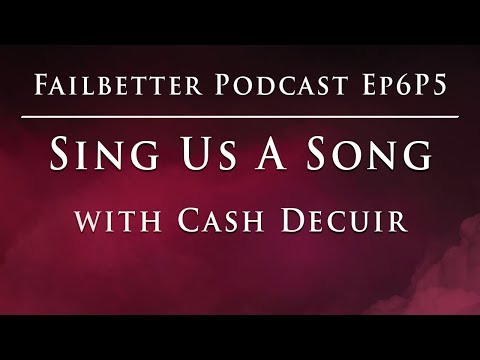 I’m bringing back this old topic because since the release of the Hurler station, we might have new development. The Liberation means a lot of things for different people, however, if the goal of the Liberation is to liberate somebody or something, that would be the Black. Indeed, it is said that the laws passed by the Black would threaten the whole concept of a kingdom, and therefor of the supremacy of the Judgment. Also, this might answer the question on whether the night is alive or not. Strictly speaking, the night is nothing. It does not exist. Which is why, in the absence created by the Judgment, we can hear it scream, or more accurately, not hear it scream. The Black never existed, and it is this absence that we do not hear.

The Liberation is more than that, of course. It is also the Liberation of every one from the tyranny of the Judgment. It is possible, however, that some of it’s adherent might see these two goals as one.

the Black never existed, more that is is forbidden from existing. Unlike the Is and the Is-Not, the Black (and the night) are the Can-Not, the things specifically verboten and which, by the commandments of the reigning Judgements, can never be. We know Correspondence Sigils which are phrased in the positive, which enforce a mandate on reality, are heat and movement; and those that prohibit are cold and stillness, entropic in nature - the Black would therefor be something that is at absolute zero, denied any potentiality, chained by freezing law into non-being

Perhaps it is the Discordance that keeps the Black safely confined to Can-Not?

no, now that we know the Discordance is Laws that are considered Discordant and outlawed, not a language used to outlaw