as much an important part as any other, game balance is important for keeping a game interesting.

In my first couple hours i’m finding some issues. Chief among them is poverty.
Compared to sunless sea, the costs of fuel and supplies have doubled, but the return on port reports, at least what ive seen so far, seems about the same. Quest rewards seem punishingly low - i only made a total of 16g for picking up a filmmaker from hybras. But it cost me 180g of fuel and supplies to find the place and return. At this rate i’m headed for death by starvation within the next half hour :(

The change - advertised in the opening tutorial - to make supply consumption no longer vary with the number of crew you have, does not seem like a good one. It deprives me of the ability to run with a skeleton crew when times are tough. And, when starvation sets in and the crew start killing or eating each other - it doesn’t decrease the number of mouths to feed

Requiring some cost in supplies to feed the scouting bat is an interesting mechanic - i do actually like it in theory. But at this early point in the game when every scrap of food is precious, the vain attempts to scout for ports where i might find free stuff, are only serving to hasten our starvation

When i limped into the lush and verdant port of hybras, i was hoping for at least some complimentary food from the mayor. Storylets did indeed indicate a free meal, but my crew’s hunger didnt actually change, and we limped back out still on the verge of starvation
Now ive managed to crawl into a port full of artists begging me for money, while all i can think about is where to find the next meal as a third of my crew have already died.

This is pretty hard

The crew management was great. Why remove it? There were some pretty cool opportunities to fiddle with it if you like (looking at WE ARE CLAY here), but it never was something that you HAVE to do - just a small mechanic that you can use if you want to optimize everything. Kinda leaves less room to wiggle with your fuel/supplies & cargo management and to reward those seeking to optimize. I wonder if they removed the weight mechanics too? That 300 weight ship was the d__n best one.
edited by Atrocity Dancer on 8/30/2017

also, unsure if intentional design decision;
The requirement to face your target (can only fire forward) plus the rather slow turning rates, and extremely high damage of weapons, seems to lead to combat being about ambushes. Whoever lands the first shot wins, especially if you hit the enemy in the side with a scatterblast.

i’m not sure yet how i feel about this, but i think reducing the damage of weapons to make combat more thoughtful, wouldn’t be a bad thing

Another example of the quest rewards being too low 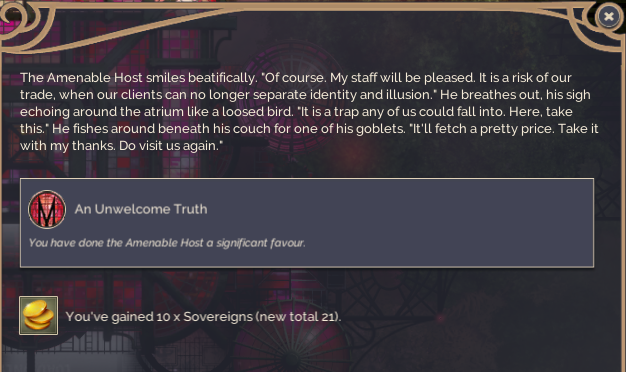 10 sovereigns is kind of insulting especially considering the nature of the Significant Favor i did for him. For a frame of reference, a unit of fuel costs 20, and a unit of supplies costs 40. This isnt even enough to put dinner on the table tonight, my crew have already turned to cannibalism out of starvation

Could this just be a typo?
In sunless sea, a typical easy quest like this would reward 100 echoes. Did someone just forget a zero on the end of all these quest rewards?
edited by Nanako on 8/30/2017

Quest rewards feel like someone forgot to put an extra zero in, really

Quest rewards feel like someone forgot to put an extra zero in, really

This was, unfortunately, my greatest fear with the early access. Sunless sea had the same problem initially - before port reports were added, the game was so cripplingly hard that nobody could survive long enough to experience much of the content.
Here, port reports are in from the start. But if anything the initial balance problems feel worse. hopefully things will be ironed out soon

No, I meant that quite literally. I would submit that as a bug. It really looks like that they forgot to add extra zeroes to the rewards O_o

Well ive just brought the pernickety factor to hybras and, while not wishing to spoil anything, i’ll say that i really ought to be able to raid the colony for food at this point. Or even pick mushrooms from the marshes. Anything for a meal ahghhg
Even current circumstances aside, hybras is a green and pleasant land, not unlike the mangrove swamps of the neath. There really should be some way to harvest free food from the area

My original crew of 11 is down to 2, they’ve not seen a scrap of real food in weeks, they just keep eating each other to stay alive, as their numbers dwindle. Game over is rapidly approaching ;-;

The damned factor didnt even pay for my expenses in transporting him. Does he have no idea what fuel and supplies cost out here?
edited by Nanako on 8/30/2017 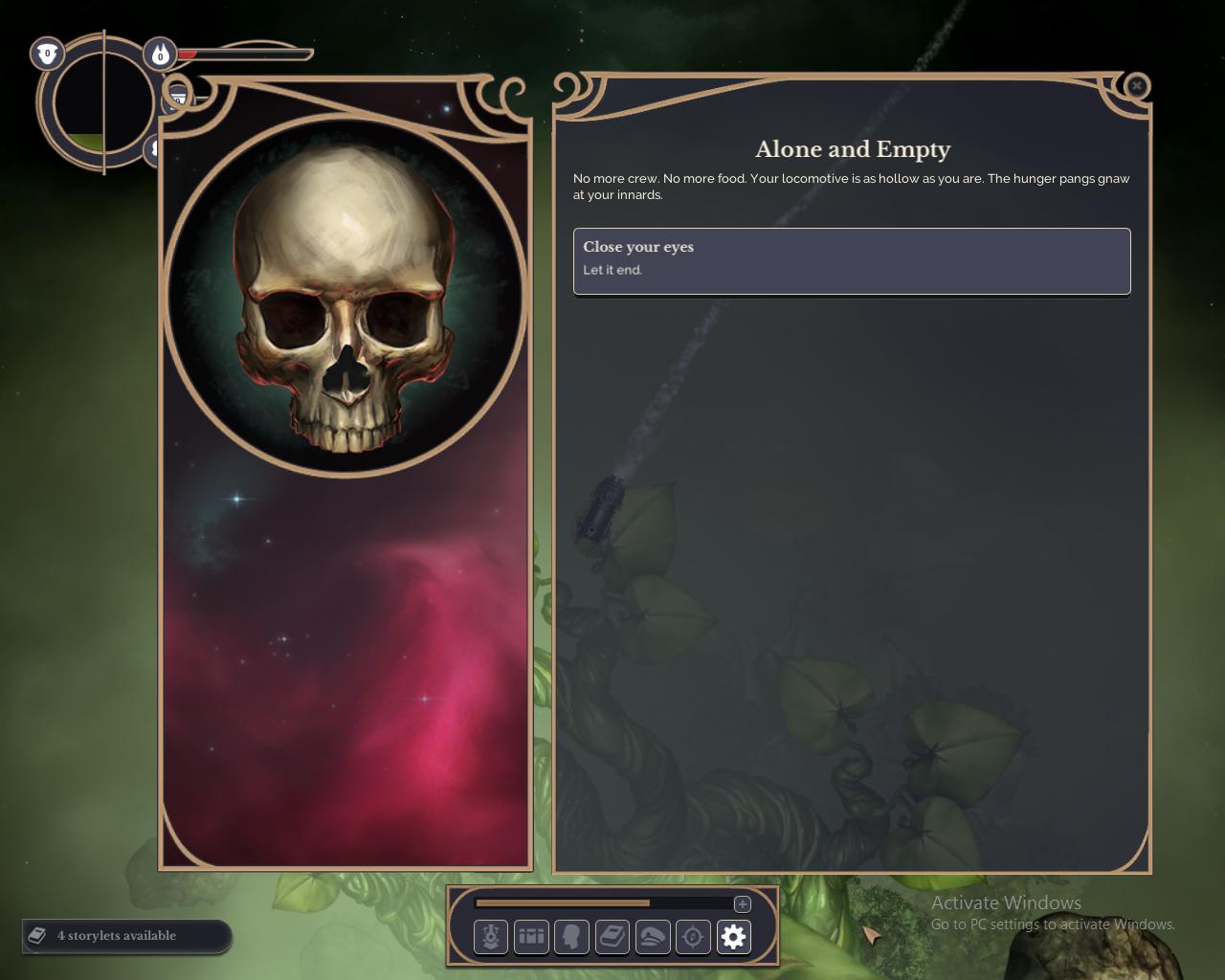 Well i started a new game, things are going better since i beelined to port prosper.

I’m winning quite a lot of train battles, though it feels like the enemy isnt trying. I’ve killed several of those wierd rebel colonists and some bandits through the simple strategy of shooting them in the back.

For some reason they often just dont react when shot, and continue on their way, ignoring me while i plink away at their rear. Although AI ships seem to be faster than me, due to the power of weapons i mentioned earlier, i’m still able to chase them down and kill them with four careful shots from my Cotterell & Hathersage “Jerusalem”

AI ships should probably react a bit faster, or stop trying to run away when its clear they can’t outrun boolet

now that ive learned to abuse the strafe/dodge boost thrutster, things are getting even easier. 2-3 good shotgun hits to take down a marauder ship, it couldnt even turn sufficiently to land a hit on me

The harshness of this economy is forcing me to view everything through a mechanical lens.

That 4 damage hit i just took from a sky monster? It cost me 20 gold. The supplies i got from harvesting its corpse is worth 40

20g and fuel i get from a port report? That’s 40g total. Its a loss when you consider the 60g of fuel and supplies it cost me to get there and back.
Everyone i meet, regardless of allegiance, is getting blown out of the sky and looted for valueables. Being ethical is too expensive

I thought about selling my guns to raise money, but the occasional profit they bring in makes them barely worth keeping. The armor too. If i cut it really close to the wire, and wait until the engine is leaking coal before i go for repairs, then the bronzewood armor plating, plus the 160g full repair option, allows me to purchase repairs at 4.44g per hull point, instead of 5g

The speculative expedition I took in a random direction in hopes of finding a new port was just throwing 60g in a hole, no profit. Every second the train moves, it’s burning money. If its not moving towards profit i will die

I feel like a ferengi. Or like some sort of corporate bureaucrat. Every single aspect of the game has been reduced to a financial transaction. Having fun costs money, and there’s no room for it in the budget.
There is a certain enjoyment in this efficiency and minmaxing, but its shifting focus away from the story and narrative aspects of the game. I can’t just buy a round of drinks in the pub, or invest in scholarly expeditions or artistic architecture. Anything that doesn’t contribute to finances has to be ignored :(
edited by Nanako on 8/31/2017
edited by Nanako on 8/31/2017

Unlocking Mme. Lumiere’s shop helps, a lot, with getting money. So much so, honestly, that it’s kind of ridiculous. Hopefully as more content is added, the early game will get easier.

[quote=Nanako]
Everyone i meet, regardless of allegiance, is getting blown out of the sky and looted for valueables[/quote]

Try meeting Parchment-Wrapped Horrors - you will like it. They live around the Nature Reserve and the Circus and they drop 2 brozewood. Killing them pays off. Beware though: they shoot quick. But they think too much between the shots and at such moments they are easy targets. My tactic was: shoot - wait for their shot - strafe - repeat the cycle.

Unlocking Mme. Lumiere’s shop helps, a lot, with getting money. So much so, honestly, that it’s kind of ridiculous. Hopefully as more content is added, the early game will get easier.

Lumiere’s shop combos well with the background option that allows you to take the Condemned Experiment. 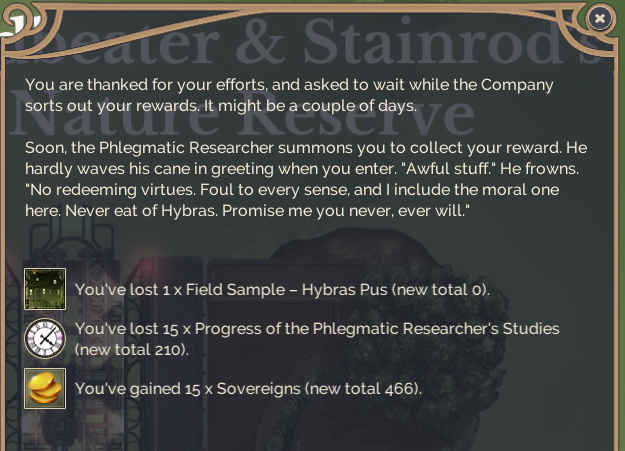 This reward absolutely does not come close to the cost of retrieving that sample, nevermind the even higher cost of coming out here to deliver it. No less than 200 guineas would be barely adequate. This is a massive loss, and makes me not want to help these people any farther

Yeah rewards definitely need to be balanced more right now. I was surprised with the very large amount from the Clocktower! Then there are others you have said that are insultingly low. If I had not done the clock quest first I definitley wouldn’t have survived long enough to die of terror. Which is not the way it should be.

On the subject of terror: there doesn’t seem to be any really great ways of managing it right now. As the best way to make money is generally to go out for longer journeys to hit multiple ports I find this really puts it at odd with the other systems until some more balancing is done. Also what happened to the circular counter? :( it was very useful for gauging how dangerous your position is terrorwise and where the safer routes to take were.

As for combat I also agree and will echo something I read on the steam forums that really struck true as how things are right now, it was something along the lines of: There are 3 combat types right now 1. The enemy strafes around with crazy mechanical position and destroys you. 2. They speed on by and there’s no way you can catch them 3. They derp around buggily or at least rather stupidly and you totally destroy them from the side before they can do anything or they might be so bugged they can’t even turn to face you.

Oh I forgot to add that I am also extremely disappointed with the removal of crew management. I hope this is just temporary and not at all planned to stay. It was nice to have to worry about feeding a larger ship or potentially finding yourself hampered by major losses. As it is right now you might as well just remove the whole mechanic. I don’t see the need to dumb it down and I think it really took away a fun aspect of the game.

Also what happened to the circular counter? :( it was very useful for gauging how dangerous your position is terrorwise and where the safer routes to take were.

There are no safer routes to take, it goes up at the same rate no matter what, as far as I can tell. The safest route is whatever gets you where you’re going the fastest.

That said, it’s annoying that there are so few ways to actually reduce Terror while you’re out of NW, especially since you can only reduce Condition level once.

Spectacles, once they’re implemented, should help out a little on the Terror front. Hopefully they’ll also add recurring Condition recovery to Magdalene’s as well (or at least some way to do it).