Can I get the armoured guineau-pig if I have high enough SC? :P

Also, is there any story related to Jenny’s Wimple, or is it but an item?
edited by Vincent Asmund on 8/17/2016

The guinea-pig is only available for Fate, I’m afraid.

Yes, there’s a story to the Wimple. You can return it to Jenny at the Feast. You can even get it again after that, to keep as a souvenir if you want.

Alas, the rector will suffice.

I don’t seem to have the option to return it, but I’ll check again later.

[quote=Vincent Asmund ]I don’t seem to have the option to return it, but I’ll check again later.[/quote]Like everything else at this Festival, it appears randomly ;). Next time you see the Hooded Lady, scroll down a bit…

I’ve raised my running battle higher than 7 three times (twice to 8 and once to 9) and didn’t get offered the rector or wimple. I had to settle for the consolation prize of normal items. Is it entirely random when those options appear? Do I need exactly 7 running battle?

Running Battle translates fairly directly in Catch level. It’s when you go to the Cove that the RNG is screwing you: it’s random, and the Cove value you get (which determines which rewards you can choose from) can be as little as half+1 your Catch level, or as high your total Catch level. Basically, keep trying - you’ll get lucky at some point.
Caveat: I think.
edited by Barselaar on 8/17/2016

Ouch. I just had my 11 become a 6. Good thing I’d already gotten lucky and was only getting the Wimple post-encounter.

Thanks. Also, to get the knife, do I need a low running battle? Or can I still get it at higher levels?

You need exactly Picking… 3, so a SC between 3 and 6 can get you there.

Please do read the OP, everything’s explained there.
edited by phryne on 8/17/2016

That’s a new for me. I got to have lower Catch quality to get lower prizes. Almost all my quirks are 4-10, therefore my chance to lose is low. Never thought i’ll find myself in such situation.

Yes, there’s a story to the Wimple. You can return it to Jenny at the Feast. You can even get it again after that, to keep as a souvenir if you want.

Oh, what? I’m going to have to dance with the RNG all over again, because I must have all the things, just in case!

Time to blow my glim stash…this should probably do it. 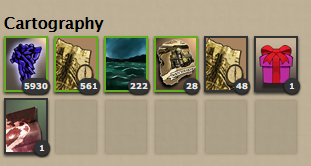 Can you return the wimple twice or more, and does doing so accomplish anything other than changing your Encounter with the Mayor of London quality?

You can return the wimple only once. If you get it a second time, it’s only for you to keep as a souvenir.

Is the Curate a threat to my Hedonism? I seem to recall losing some points there, and I’m almost at 14.

Yes, he is. Same for the Chef and Austere. You can take the Jenny option if you want to avoid menaces/quick loss.

Have only to get the Wimple a second time. Gave a strange catch to the hooded lady and got to Wreckers Cove, but even for Fate wasn’t offered the Wimple. Any ideas?

You don’t need Fate for the Wimple, you need a Picking… value of 7, like the first time round.

It can’t possibly be better than boxgrind in raw echoes.