&quotLet me come with, will pare him together.&quot Ezekiel critters angrily, pacing the room as Eli prepares.

&quotFollow me and you’ll regret it.&quot Eli doesn’t take this tone lightly. He’s changed from who he was. His future is a closed door. &quotSiobhan can’t know that I’m gone. If I come back, I’ll tell her. If not. It won’t matter.&quot

Ezekiel turns to look at the slumbering form, smiling happily to herself. He turns his head to Eli, who has a foot out the door. &quotPiece of shit.&quot

The Forgotten Quarter. The slumbering countenances of long-dead figures, horrid hunts in the dead of an eternal night. Eli looks at his map. A shrine of St Joshua. Appropriate.

He steps through the archway and sees the figure before him. Thinking? Waiting? Perhaps neither.

The figure before Eli is a disgraceful sight. Disheveled and unkempt, reeking of stale vomit, his deacon’s robes torn and stained, Passionario could easily pass for a Raggedy Man down on his luck. The reason for his state is not hard to deduce: the floor of the ruined shrine is strewn with empty wine bottles. The stacks of half-opened crates behind the dusty altar suggest that his binge has been going on for some time, and can potentially last for weeks more.

&quotElias Lowe…? Well. I be damned. Ever more so, that is.&quot

Strangely enough, his voice is not slurred or distorted; instead, it has a peculiar echoing quality to it, as though it was coming from the bottom of a well.

&quotWhy are you here, Elias? Have you come to enact your terrible and bloody vengeance? Cut off my head and sell it to February? Plunder me for secrets before I drown them all in a bottle? Or have you simply come to laugh and gloat at my fall… and your victory?&quot

&quotAnyone looks victorious next to this.&quot Eli gestures at the scene and steps closer. &quotWhat happened to you anyway? I expected to find you with a gun in your mouth or a neddy ambush. Not… This.&quot

Eli draws his revolver leisurely and loads two bullets into it while he speaks.
edited by The Absurd Rogue on 7/16/2016

The fallen spymaster tilts his head at the sound of revolver clicking and nods approvingly:

&quotIn a hurry to get this sorry business over with? Can’t blame you. You have good things to get back to. People who love you for who you are and not for what they can get from you. Friends who will come to your rescue in a time of need instead of leaving you for the scavengers. A new family. A great legacy.&quot

&quotMe, though? I’m a dead man walking. Like you were when you walked out of that courtroom, but seven times as worse. Every vengeful victim I’ve wronged, every hungry spy lusting after the secrets I’ve learned, every ambitious rival I’ve surpassed - they will all come for my ass. And the slow boat will give me neither shelter nor relief, now that the Embassy has foreclosed on my contract. No, when I die, it’s the trireme for me. I’ll row and row and row, until some German operative or Calendar fanatic forks over a suitcase of souls for the privilege of acquiring me for his or her torture chamber.&quot

He picks up a bottle of cheap Greyfields and drains it in a single gulp:

&quotAhhh, but I haven’t answered your question, have I? The hooded bastards threw me out like a starveling alley cat. Thirteen years of faithful service, unmade in a minute. All that bloodshed, all that violence, all that misery I’ve caused and endured, written off because of a single mistake. A moment of weakness, a treachery of voices… AND NOW WE WILL NEVER HAVE PARIS!&quot

The bottle shatters against a nearby stone pillar. The anger fades from Passionario’s face and voice as quickly as it came, leaving only sadness:

&quotSo yes, the rumors were true - I’m a bloody civilian now. If you were looking to add a second Fist of the Bazaar to your list of trophies, you’re out of luck today. I’m not a Fist anymore, and certainly not of the Bazaar.&quot
edited by Passionario on 7/16/2016

OOC: wow, I didn’t think it was even possible to feel sorry for Passionario…but I do :P

“You don’t deserve this.” Eli states simply. “I don’t believe so.”

Eli walks over and presses the barrel against Passionario’s forehead. “Say the word and it ends forever. No trireme, no Calender council. You’ll be where they can’t reach you, in the arms of The True Death. Say the word and I’ll take you there.”

“Interesting. Did you make Dear Edward the same offer, on the night the old Orphanage burned?”

“Dear Edward was an obstacle. He’s not anymore. You and I still have some time to weigh the balance.”

&quotAh, yes. A good, sensible, professional approach. He’s an obstacle. She’s a target. All part of the Game.&quot

He shakes his head, the barrel of the revolver digging painfully into the skin:

&quotEdward was good to me, you know. More than just a mentor. A friend I didn’t deserve. He was twice the man and three times the Fist I ever was. So I’m surprised that you’re willing to grant me a quick clean death, when you left him to burn alive.&quot

&quotSpeaking of burning alive, have your friends figured out how to heal that sign?&quot

&quotCan’t be done? Many would agree, even some of my former colleagues, despite erasing messages for a living. ‘Common wounds can be healed with F.F. Gerbrandt’s concoctions, permanent tattoos can be unmade with irrigo ink, even weeping scars can be removed with Rubbery slime, but Truth-That-Burns? Impossible!’&quot

A corner of his mouth twists in a half-smile:

&quotThey’re not entirely wrong… but they’re not entirely right, either. Truth cannot be erased, but it can be learned and passed on. If you carry the brand on your flesh for seventy-seven days and then inflict it on another, your own scar will heal swiftly thereafter. Like so.&quot

Passionario lifts his right hand and pulls down the sleeve of the robe, exposing the forearm. It is marked with a shape that, apart from the healthy pale pink color, is identical to the one burned into Eli’s stomach.

&quotI’ve answered your questions to the best of my ability, but you still haven’t answered mine. Why are you here, Elias? Do you want peace of mind for yourself, so that you can sleep soundly without worrying about me lurking in the night? Do you seek to protect your people from my predations? Or do you believe that even I can be redeemed at the eleventh hour?&quot

“You can absolutely be redeemed, but that’s not what I’m here for.” Eli shakes his head solemnly. “You were always unpredictable in your machinations, but now you’re completely untethered. I need to ensure that you won’t come back from this place you are in. And I don’t believe in half-measures.”

&quotWhich is why you brought not one, but two bullets.&quot Passionario’s voice is a mixture of resignation and skepticism. &quotStill a gamble, especially here. There’s too much of that accursed violet light inside this eyeless skull of mine. Forgotten Quarter is sensitive to it; St. Joshua’s shrines doubly so. Too much of me could escape. I might become another hungry spirit lurking in the darkness, preying on unwary explorers and driving them to madness. I think I’d rather prefer the triremes.&quot

“I don’t care what you prefer. This isn’t about you.” Eli lowers the gun and retrieves a small velvet pouch. “Where is your soul, Passionario?”

“I don’t know. The voices said that it’s ‘in the hands of my enemy’. Which narrows it down to about half of the world.”

“That’s okay. You can have mine.” Eli shakes the velvet pouch and a small bottle falls into his palm. He holds it out to Passionario with one hand, while the other retrieves a small pocket-watch from his coat. “See, I almost went insane from all the things that happened to me on the surface. Not like, Neath insane. The real deal. But a kindly devil made me an offer and suddenly, I could cope. He told me that he would keep this off the market, as if it were, for whatever reason, put into the body of another… That emotional trauma could carry over to the new host.”

Eli doesn’t smile. He doesn’t move. He just watches Passionario. “I want you to see yourself the way I see you. The way we all see you. Then maybe, you’ll understand.”

Without a comment or gesture, moving like an automaton, Passionario reaches out, takes the soul bottle with his left hand, and unstoppers it. The glowing mote within rises up, but before it can escape, Passionario grabs it with his right hand and clenches it tight. The moment he presses the fist against his forehead, a single tortured moan escapes from his throat.

As seconds pass, becoming minutes, Passionario’s rapid shallow breathing becomes deep, labored and gasping. Streaks of blood ooze down from his nostrils and ears. He falls to one knee and his head slumps down, yet his fist is still pressed against his sweat-drenched face. Finally, after what seems like an eternity, he manages to utter two words in a barely recognizeable rattle: &quotNot all.&quot

With a scream, Passionario slams the glowing mote back into the bottle, which he swiftly stoppers. He rises to his feet and stares at Eli with tear-filled, bloodshot, but undeniably present eyes. 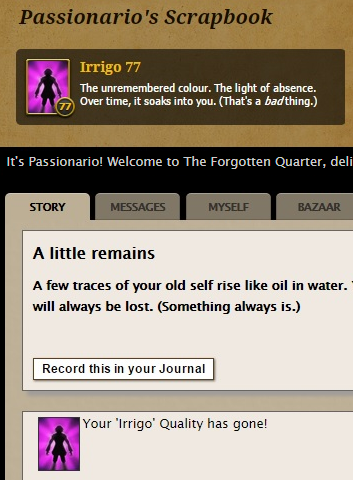 After a few seconds of silence, he digs out a pocket-watch - very much like Eli’s own - from the inner pocket of his ragged vest. With the other hand, he hands the soul bottle, now coruscating with violet light, to Eli:

Eli reverently takes the soul bottle in his hands and places it in the velvet pouch.

“I knew that I’d be able to look you in the eyes one day.” Eli removes his spectacles, able to see well enough in the dimness of the shrine without them. Two eyes like cracked, red embers glare at Passionario.

&quotI see exactly the kind of man that London and her people both need and deserve. I will die slightly easier knowing that I’ve left them in your capable hands.&quot

He turns away and rummages through one of the crates. &quotSpeaking on which…&quot He digs up something and turns back to Eli:

&quotYou’ve shown remarkably good judgment so far - certainly better than I have - and so I have no choice but to trust it. You’ve seen me both proud and humbled, victorious and defeated, as the hunter and as the one being hunted. I can think of no better man to decide how much of a chance I still deserve, if any.&quot

He holds out his palm, which has four revolver bullets in it.

&quotFill as many chambers as you want. Leave as many empty as you see fit. Give the drum a good spin.&quot He points between his newly restored eyes. &quotThen give me your best shot.&quot
edited by Passionario on 7/23/2016