I’ve been playing a few different games now with different save files, so I’ve had more experience with the Terror mechanic and I would like to share my thoughts before next week.

Like other people have said, it’s really easy to gain Terror. There are two areas where I would say that this negatively impacts the game, and the first one is combat. I’ve got my locomotive pretty well equipped for space combat, but the time that it takes to kill a Marauder or Cantankerus (is &quotus&quot the singular for these things?) and pick up its remains is Terror ticking up all the while. I tend to be pretty thorough in planning my runs so that they snake through Port Avon, Magdalene’s or Lustrum at some point for the Terror reduction, and while these ports help, I feel myself torn between fighting and getting one more Port Report. I think being a bit on edge is a good way to play Sunless Skies, but not at the expense of the other mechanics.

The other thing is that I have to be incredibly careful not to rack up over 65 Terror before heading from the ports in the outer circle back to New Winchester, and by &quotports in the outer circle&quot I mostly mean Carillon. It’s hard to make it there without at least 45 Terror due to the combat issue that I mentioned earlier, and it’s hard to know when to stop doing Penance checks and head back to New Winchester. I like Carillon and I think that it’s a cool port with lots of neat events, but at the same time it’s no fun to head there, get nothing but Terror for my troubles and increase my Condition right before I hit New Winchester.

I do like Conditions though. The idea of Terror sticking to you in a much more difficult to remove form is great, especially since events get slowly worse as you get higher condition. And Wonders of both kinds just sound great in general. And really, I do like feeling a bit on edge as I travel through the High Wilderness, and the game has done a great job of making me feel that so far. I’m sure that things will be different when the next patch arrives, and I’m looking forward to seeing how you all work the mechanic.

I’d like to see some emergency fallback options we could use in the field, to reduce terror a little and buy time to limp back home.

Things like using up tea/extra supplies in order to throw a little party for the crew and cheer them up a bit. Maybe burn excess fuel to have a little fireworks display. Calibrate the terror reduction so its a fairly expensive and inefficient way to clear terror

A quick couple of ideas on visual cues for Terror…

The Division had a survival mode where you have to (surprise!) survive in a blizzard. If you got too cold, frost and ice would appear around the periphery of the player’s screen: 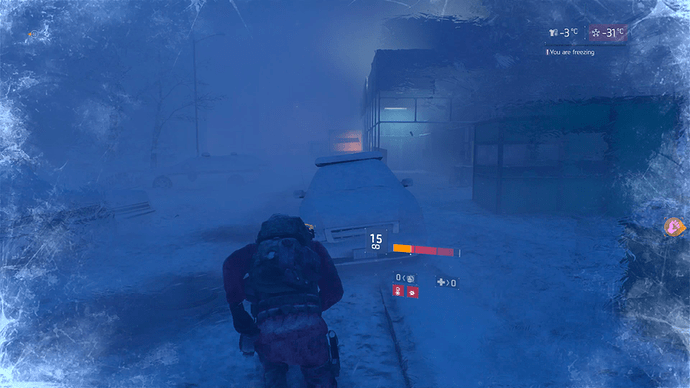 I’ve also seen an example of blood vessels appearing in the player’s vision, something like this: 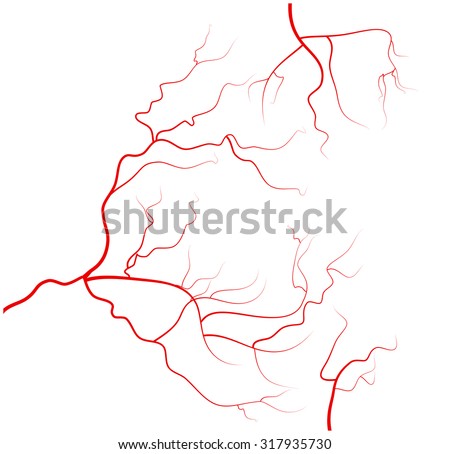 My suggestion would be to have these kinds of effect creep into the edges of the screen as Terror rises.

The Division had a survival mode where you have to (surprise!) survive in a blizzard. If you got too cold, frost and ice would appear around the periphery of the player’s screen:

[images snipped] [/quote]
I don’t mean to sound negative, but I really don’t like it when notifications are part of the screen viewing the game instead of the HUD – that sort of thing tends to obscure areas toward the edge of the screen, which makes combat significantly more difficult, and I also find it significantly distracting.
edited by trajing on 11/24/2017

[quote=Agatheis] that sort of thing tends to obscure areas toward the edge of the screen, which makes combat significantly more difficult, and I also find it significantly distracting.

You’re not wrong, but i’d consider that an intended part of the functionality of such a feature.
The opacity and intensity of it could be tweaked to get the right feel. maybe it could even just be a pulse once every 30-60 seconds as a reminder

Oh i forgot another thing, Magdalene’s

Currently, in addition to the expensive condition-reducing treatment, there’s also several options to pay for a lesser treatment, which reduces terror by 25

This lesser option is currently a complete waste of resources in most cases. This is largely due to the fact that magdalene’s is always fairly close to new winchester. The possibility of you being able to reach magdalenes, but not new winchester, before you gain a condition point, is vanishingly small, requiring you to be in a specific area of the map.

So here’s an idea, as an improvement. Make the lesser treatments at magdalenes inure the crew against future terror, by giving a buff for some time which reduces all terror gains (or possibly only passive terror gains from driving around). 20-40% reduction would be good.

How long should it last? I’m thinking about an hour of realtime. or maybe a smaller amount, but only when the game is unpaused.
Give us a reason to go back to magdalene’s regularly to gain that terror resistance

The most interesting part of terror is the tension it creates and the weird random events that happen. I really liked the lady in lilac from the first game.

An effective way of giving terror feedback would be changes in the mechanics like your scout being too afraid to go out there or your weapons becoming less accurate but faster to reload.

Another way of giving terror feedback could be to have specific enemies that are attracted to your fear. Something like the Constant Companion that hounds you when your terror is really high, but can be outrun and lessens terror when it’s killed.

Also,changes to the map, more foreboding scenery that appears when terror is high, shapes that move in the background, sounds etc. Sunless sea was great at building atmosphere.

In terms of sacrifices, you could have items that have a really high value in New Winchester that can be consumed to lessen terror. That would create an interesting conflict because you’d want to get that item back home and you have to balance that against the value of your sanity.

Also, this isn’t specifically about terror but do you guys have any plans to bring back the headlamps from the first game? I thought they created an interesting tension where they attract enemies and lesson your terror gain when they’re on and allow you to stealth past larger enemies at a cost when they’re off.
I haven’t felt that kind of tension in Skies so far and the opportunity to slip by a dangerous enemy seems to be gone.

Playing the latest build, I’m still not noticing Terror, unless I get a ‘terror increased’ line in story boxes. I know to look at the meter, but Terror is still not visceral. It also seems to have gotten very easy - but that may be due to how often I return to New Winchester (after roughly every 2-5 port stops). So the intent that the player wants to return to New Winchester, as a safe haven, is working just fine - but I don’t feel the tension that I love so much from Sunless Sea.

Playing the latest build, I’m still not noticing Terror, unless I get a ‘terror increased’ line in story boxes. I know to look at the meter, but Terror is still not visceral.

I’ve gone back to Sunless Sea for a bit. Small though it may be the Terror meter in Sea catches my attention more than the one in Skies. Having the dots around the skull:

…helps draw my eye. In contrast, in Skies, there’s a very noticeable skull in the meter, but no movement; and with the thermometer increase colored white, it looks innocuous.

So, just in terms of the Terror meter in Skies, if it draws one’s attention by changing in some way other than the ‘temperature’ increase, that might help.

so my game generated the map with Old Tom’s Well and the Grave of the Silent Saint right next to each other.

I still have goosebumps, the terror effects on the screen, the music, and the two beautiful, horrifying discoveries themselves combine so perfectly. Extremely well done to the team

[quote=Jimmius][color=#6666ff]so my game generated the map with Old Tom’s Well and the Grave of the Silent Saint right next to each other.