Exceptional Story: The Waltz that Moved the World 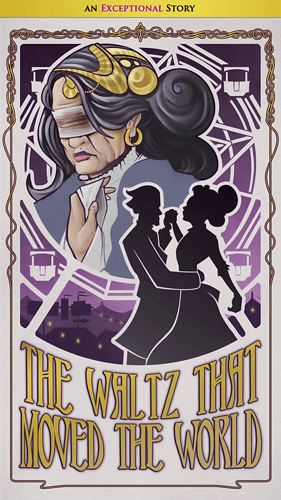 [color=#ff00cc]Twenty-five years ago, the Duke abandoned his family in Vienna.

Twenty years ago, the Duchess sought him in London. He blinded her. She died in Vienna.

Today, their daughter descends to the Neath. She has her mother’s bloodied bandages, three leads to her father, and a knife.

Play An Exceptional Story: A Battle by the Stolen River to begin.

The Waltz that Moved the World is the final story in the Heart’s Blood season. If you’ve played Art of Murder and Flint, finishing this story will make you eligible for an additional, delicious opportunity, to follow in February.

Grr, tough decisions! I really like the theme so far, the story is a bit cryptic but then I’m not done yet!

Very initial thoughts: I think this is my favourite Exceptional Story start - very engaging and intriguing from the very beginnning.

Most other Exceptional stories (even those I rank as my overall favourites) took a while to get really interesting for me. This story got me hooked immediately.

For posterities sake, here is a permalink to an echo to one of the endings. (and reward)

Echo from reuniting the Aesthete and the Duke: http://fallenlondon.storynexus.com/Profile/michael7050?fromEchoId=7671035
Reward included one Vital Intelligence.
edited by Michael7050 on 1/28/2016

There it is. I finished the story.

I really liked it. The characters had enough depth to feel for them, and the choices made me hesitate quite a bit. I guess I regret my final choice, and whould have regretted it as well if I chose another ending anyway. Which proves that the story was immersive enough for me to think that way.

Two things seemed a bit weak to me. The beginning, how it is set in motion [spoiler]The Daughter doesn’t know anything about you but ask you for help in finding a dangerous murderer… it’s quite quick, I’d like more time to get to know her and then being asked this. And the way she knew who to talk to because a ghost told her &quotask him, her and them&quot was… I don’t know, it’s kind of a deus ex machina to me. PS : sinning jenny was, as always, sweet and moving, this story made me realise how I like this character.
And for once, I found that the ending is a bit… tasteless. I feel like it lacks something, maybe a bit of intensity.

I didn’t quite get the whole thing and how it’s related to the thief, it is linked to the story but feel quite far and distant. Maybe my level of english is to blame and I missed some clues.[/spoiler]

I chose an option to go after him, without telling the daughter . . . now - as I await actions to refresh - she just followed him into his cab. The only option I have to pick is ‘reunion’, even though I never intended (and never picked) to reunite them . . . I don’t think I even mentioned her to him! Is this intentional?

don’t worry, it’s intentional, wait and see, you will have choices, though choices

She had you followed.

what have you chosen robin?

Okay so I have a bug now:

]I picked the try and get her to dance with him option and the talk to her to reconciliate, but I hit try again rather then onwards and now my ONLY options are stab or prevent. I can’t go back to talk to him, I can’t pick the option again. I’m stuck ubale to reconcilate the two

Ah, the conclusion to the Flint arc! Wonderful, I’ll enjoy this when I have time!

So, question: what is the third item for the thing later on? I have the blood vial, and the essenses, but I don’t think I got anything from this story.

I have just reached the series of storylets one must choose from to achieve the climax of the story.

I am torn. Morally, I think it would be most moral to encourage father and daughter to reconcile. My character (I am only playing this Story with my main character), I am certain, would allow the Aesthete to have her revenge. But the player in me burns to know what secret the Duke holds–or whether, indeed, the Nadir has stolen it from him despite his words. What to do?

I do think the choices posed are the most difficult I’ve seen in FL since the non-Fate-locked story of the Contessa that I encountered so many years ago. Bravo, Failbetter!
edited by cathyr19355 on 1/28/2016

[quote=Robin Mask][quote=Kylestien]So, question: what is the third item for the thing later on? I have the blood vial, and the essenses, but I don’t think I got anything from this story.

(Am I the only one with Griswine left?) XD[/quote]

No, indeed, I still have my cup of Griswine. I am wondering how one gets to use it.

[quote=Catherine Raymond]
No, indeed, I still have my cup of Griswine. I am wondering how one gets to use it.[/quote]

If you didn’t drink it in the garden of statues and become a statue, there’s no use for it now. The item from Flint that goes towards the reward for completing all three Heart’s Blood stories is the Collection of Essences from a Prison of Flint, as far as I know.

No, indeed, I still have my cup of Griswine. I am wondering how one gets to use it.[/quote]
So do I… was there an opportunity to use it in Flint? I’m afraid I wasn’t paying much attention when I played through it. :v

[quote=Catherine Raymond][quote=Robin Mask][quote=Kylestien]So, question: what is the third item for the thing later on? I have the blood vial, and the essenses, but I don’t think I got anything from this story.

(Am I the only one with Griswine left?) XD[/quote]

No, indeed, I still have my cup of Griswine. I am wondering how one gets to use it.[/quote]

Thinking about it, I find the ending I got hilarious.

So the daughter comes all the way from Vienna to take revenge on her father, and what does she take from him? Eyes he can’t use, a secret he went to great lengths to forget, and a life that won’t stay gone for long. And all because my character found it funnier not to tell her how Death (not) works in the Neath…

No, indeed, I still have my cup of Griswine. I am wondering how one gets to use it.

While you can’t use it in the game right now, it would be very handy if you ever need to poison someone in a non-lethal and easily reversible, but potentially permanent manner.
edited by Curious Foreigner on 1/28/2016

Has anyone chosen to steal his secret?

The conclusion in which you take the secret is echoed on my profile and the secret itself is displayed as my mantelpiece.

On a separate note can you use the items gained from the Flint arc yet, or will that come later?
edited by Wilhelm the Stalwart on 1/28/2016