I’ve mentioned previously that @kaanyia wrote a script which would allow one to see the pre-reqs for a storylet without having to mouse over. He has updated the script to support Chrome and removed the item acquisition tips to keep the list of prerequisites clean and uncluttered(the acquisition tips can still be viewed in the mouseover text.) Users of the previous version can click the install button again to have their copy updated.
If you are a mobile or tablet user, or if you simply prefer the old interface, I highly recommend this script, which can be downloaded here:

Please note this script was written solely by @Kaanyia and Failbetter Games is not responsible in any way for it’s content, upkeep or support. It is also possible the script may interfere with future Echo Bazaar updates. If it does, it will either be mended or it can be easily removed.

My thanks to Nigel for the free publicity.

The user script has been updated to version 3 to work with the new fallenlondon.com domain. It may be downloaded at the same location as before: http://userscripts.org/scripts/show/124045

Users of the old version can just click the install button again to have their copy updated.

This works in Opera as well, though you have to manually save it to your userjs folder.

The script is now updated to work with the new fallenlondon.storynexus.com domain. The new version may be found at the same location: Dance Party

userscripts.org seems to be down at the moment/often has a heavy load…

there is a mirror site

For Echo Bazaar - Displays storylet prerequisites in plain text so that you can see the information at a glance without having to mouse over multiple icons to uncover it bit by bit.

I have been absent from the game for a little while, but I’m checking things out again and have noticed that my script is out of date. It was sorta kinda working but the output was not pretty.

I have updated it to work a little better.

The old Userscripts website is gone and I can’t update the mirror site, so I am having it hosted here now: 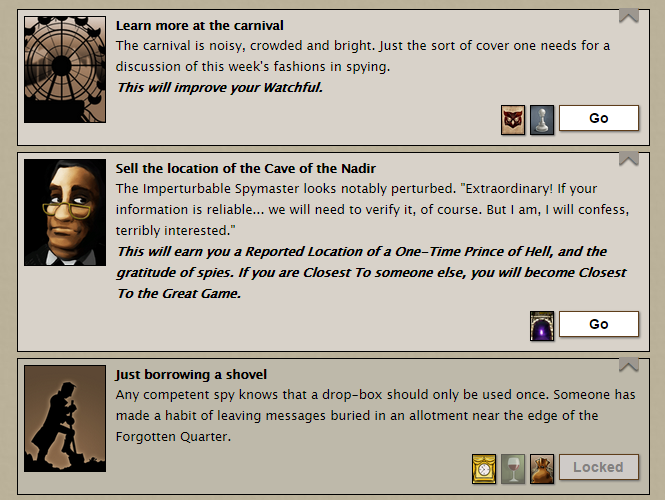 For Fallen London (previously Echo Bazaar) - Displays storylet prerequisites in plain text so that you can see the information at a glance without having to mouse over multiple icons to uncover it bit by bit.

Would it be possible to add the script as an official extension in Chrome? They won’t let you use it anymore otherwise

I’ve created a new version of script with the similar functionality for the current version of Fallen London:

(original script was broken since the release of site redesign).