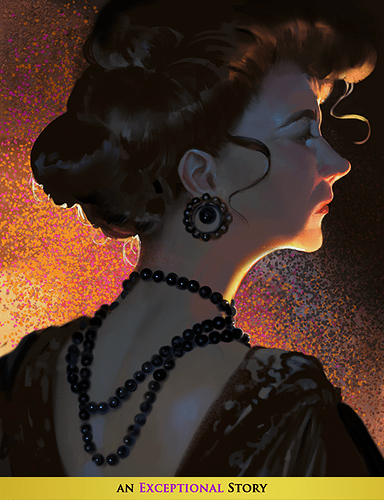 “Isn’t it amazing, what people will do when they’re in love? There are so many ways I could write about this! And here’s the best part: whatever I write, that will become the truth. Stories have power in London. They’re transformative.”

What actually happened at the Duchess of Bedfordshire’s infamous salon? Who was caught in the Duke’s bedchamber? How did Lord J_____ die? And who stole the Vicar’s cassock? The papers print such outlandish rumours! But you were there. You saw it all. And yours is the tale that will separate fact from fiction.

A Neathy whodunnit! And a terribly droll one; I laughed a lot with the accounts and the Columnist’s commentary. (Seeing oneself through the eyes of these socialites – glancing at oneself, really – was especially amusing, and I liked the references to other staples of those Veilgarden parties one keeps getting invited to.)

And certain things that everyone remembered very differently… I actually started losing patience by the third account, trying to fit everything together. In the end, it was impossible; the mystery wasn’t really meant to be solved; one simply chooses what they remember to have happened… Whether it makes sense or not. After all, what actually was printed in the paper proved just how much the truth could be ascertained, and how much it mattered; it was possibly the funniest and most revealing moment.

This was quite different from a lot of ES stories, mainly taking past in the past after all. I rather liked it-especially the twist at the end giving my character a bit of extra agency over the whole business.

Although I have to say, I didn’t even try to solve the mystery. I thought that was rather the point, really-that nobody involved had an interest in actually explaining what was going on, and that the truth is whatever you make of it’s circumstantial evidence.

Especially not this guy walking away with a Crackling Device.

Not having played it yet… is this the Neathy Rashomon?

It’s interestering to hear you got a crackling device. I ended up with a Mountain Sherd. It makes me wonder what variables were in there influencing the results of the reward.

I also got a Mountain Sherd. In my account I confirmed one element of each other account: it was jewels in the pâté, the Duke and Lady J_____ were together in the bedroom, and the monster had legs; I see Sebastian Olmen chose the caviar, the two ladies and the bat-wings. So it could be one of the previous choices that match among our stories: we both had the Duchess invite Madame X, the Duke menace the staff in the kitchen and the cassock lost in the laundry. It could be something of these, or a more complex combination.

PS: I edited this post many times; my original interpretation was rather flawed.

i clicked out of one of the starting snippets of the story by accident (i think i got a manacle or some such). if anyone ahs the echo of it i’d love to read it.

I did the same, I confirmed one piece of each witness’s account.

Hatchlings in the caviar, Lady J and Madame X in the bedroom, monster had wings. I also got a mountain-sherd.

Pretty sure I said that Lady J disposed of the cassock (didn’t steal it) and that the duke was cheating at cards.

Not quite sure how it all fits together or how that relates to the seventh bullet. Is the implication that you killed Lord J while all this commotion was happening, to smuggle something out of the house in the painting?

My play-through of the story begins here; the very next entry is the result, which I think is the one you are referring to.

My own take is that the Duchess really was smuggling gems, her art acquisitions were not just a punchline but an occasional hiding-place for the goods, she was conducting business under the guise of her salons, the new artwork was vandalised because someone was looking for something of value, the police was on to her and she fled once the situation got out of control and she realised she risked exposure.
At the same time, there were discussions of thefts and murders that had happened before the salon, which implies that someone may have been acting in parallel; the seventh bullet may have had something to do with it (though I believe only the duke actually said his gun had six bullets, and his oath was dismissed by the Tawdry Columnist). Then again, all sorts of rumours were flying about (including about the gravity of Lord J_____'s injuries) and maybe each suspect plays up the aspect that suits them. (Hell, it isn’t beyond the realm of possibility that Lady J_____ invited the Columnist just to casually mention that Madame X was toying with her necklace, the pâté contained jewels and the Duchess was under investigation, while she herself placed that little treasure in the artwork while she was in the bedroom.)
At any rate, jewels are mentioned throughout the story (as are eggs, for some reason). I am reminded of the well-known 1953 film The Earrings of Madame de…, with the anonymous socialite protagonist and the earrings that kept changing hands, though she doesn’t actually resemble Madame X that much. (Closer to the name, the promotional image might have been made with Sargent’s Portrait of Madame X in mind, though again, I don’t see that much of a similarity.)

perfect, thank you very much!

I mostly (but not completely) backed Lady J’s account, and got a canned ham. I didn’t even know that was a thing.
What am I gonna do with a canned ham???

Apparently, yes it is. Enjoy – I guess …

What am I gonna do with a canned ham???

There are uses of ham associated with the railway. Or you can just sell it.

I’m “sort of” new here – and as I finished my second exceptional story (this one), it dawned on me that these stories are not an open and shut case.

When I ended the story, I was very confused about the reveal about the seventh bullet and the rest of the details. For the record, I got a “Gap” of something.

I was even more confused when I realized that the “article” contained barely any details, and upon interacting with the three people in the auction, they all seemed to have left abruptly and suspiciously. And my question remains: why?.

Anyhoo, thanks for this take. I just found it on Google and I had to create an account on here just so I can interact and thank you because I was super lost.

I guess my question now is…are most stories in Fallen London like this? Where you have to patch things up by yourself, as the narratives are almost always left up to the imagination of the player?

I don’t think so, this one is pretty unusual in that respect.

Thank you for your kind words. And I agree with amalgamate: Exceptional Stories don’t always offer much in the way of answers or lore, but in my experience they do tend to provide a satisfactory sense of closure for the self-contained story and largely settle the questions it has raised.

By the way, I’ve just realised that the Tawdry Columnist writes for the Hopping Post, which for some reason I find very amusing.

I don’t get the reference yet sorry. But just again, to feed my curiosity – why is it funny?

It is? Huh. Oh well. :) I enjoyed the story regardless though. It just “itches” a little bit when I can’t understand the “closure”.