Coming soon: The Mask of the Rose Soundtrack

Happy new year! We hope you had a restful midwinter and have returned refreshed and, hopefully, excited to see Mask of the Rose launch THIS YEAR! Cor, blimey, etc!

Mask is on track for an April release, and we can’t wait to get it into your hands!

We’re going to the indie game event WASD in East London from 30 March until 1 April. There’ll be more to announce about everything we’re bringing to the event, and I’m really excited about it; we haven’t felt ready to show a game on a showfloor since our last outing to PAX West in 2019 so this feels very special. I hope some of you will consider coming by and saying hi!

This month for your development blog we have an interview with our composer, Laurence Chapman. You may know Laurence’s work from 80 Days and Heaven’s Vault by Inkle!

The Mask of the Rose soundtrack will be available next month! 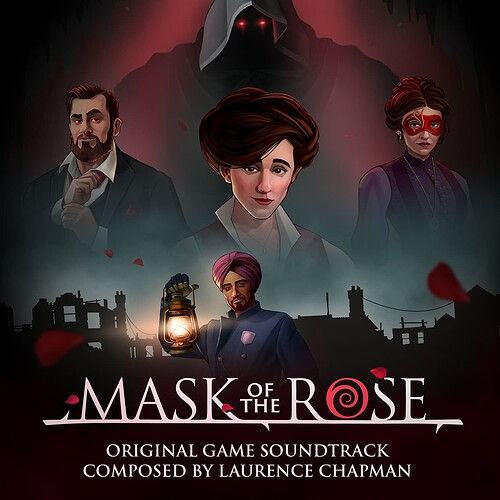 How do you usually find games to compose for? Do studios approach you?

I’d been working with Inkle for all of their projects from about 2014 when we did 80 Days, and that came about because I had a list of games companies that I was emailing, on and off, and I got to ‘I’ in that list before getting a response! They were working with another composer at the time and couldn’t quite get the sound that they wanted, so they switched to me instead. And a partnership was born!

What’s different between composing for a game and for a TV show or a film?

I’m enjoying the game stuff because you get a lot more freedom and time. So for example, the wardrobe music in Mask of the Rose has ended up being three minutes long, and it could have been two. You have a lot more musical freedom to just say, well, this theme is really working so I’m going to make it longer, and you’re not restricted by the length of a scene.

And the second thing is, the development process is that much longer. So I can see the artwork that you’re producing right at the beginning. Paul sent me ideas over a year ago about what it was going to look like, so your musical imagination is already going, ideas are already going through your head. Whereas on a film, you can be told who the actors are, and maybe get a script, but it’s not the same until the film has been put together. In a film or a TV show, it’s not really until post production that a composer can effectively do anything, and then of course you’re stuck to the picture. Which can be a good thing! Because it’s a nice challenge. Maybe you’ve got to go from one mood to another quite quickly and then quickly back to another scene. But I’m really enjoying the artistic freedom of doing games.

They say that films are made in the edit, right?

And if you’re the composer you’re right in the middle of that. In fact John Williams was doing one of the JJ Abrams Star Wars, and there were some scenes that the orchestra had already recorded and JJ Abrams would say, we’ve edited that scene out now. That no longer exists and we need to do something different. Which for many composers is the worst nightmare because you think, right, we can tick that off the list now, that’s done! And then the director comes to you and says, we need something new! But John Williams being who he is just says, oh fine, I’ll just write you something new. Not bothered!

It would be fine with me, because your job is to write music for the film. If they edit something out, then that’s what you do. If I really wanted to keep a piece of music, I’d find somewhere to put it in. It’s a job, a service you’re providing for other people. And it’s nice to feel useful, that’s the thing. I spent years practising the piano and doing all kinds of musical study, and it’s nice to actually feel useful!

What struck you about Mask of the Rose which set off your musical imagination?

The nature of the artwork somehow made it look somehow dark, but not aggressively so. It clearly wasn’t like an 18 certificate film, that kind of thing. It was a kind of nice, gothic atmosphere which I thought I could write quite well for. So when you see that kind of material to work with then it’s encouraging because you think, I’m on to something; I can get the sound world match the visual world.

Is there anything you want to highlight from the soundtrack that you think is particularly successful for the game?

I’m really happy with the main theme and the market tune. The nice thing about that market tune is Tom, the clarinettist, said “I love this tune. I could play this all day.” I think at that point the sound engineer said, “Well, we still need to get it right!”

Is there anything in the soundtrack that might surprise people, or which people should listen out for?

You could play a game called spot the sixth, if you’re very musical! There’s a major sixth (E flat down to F sharp) which turns up in the main theme and comes out in various points around the game. It doesn’t mean anything per se but it’s just a way of combining everything, if you like, so everything has a sound world.

That’s one difference between the game and the film world, is that the themes don’t necessarily develop. They will do in other games where there’s a more definite storyline, where it’s less interactive. It’s not the same way that in a film a character definitely goes from A to B and that’s not in the control of the viewer. So you know that your theme for a certain person has to be able to do something else, whereas with a game you don’t know which route the player is going to take to get to the end of the story.

Yeah, in Mask of the Rose there’s more of a defined order than we’re used to! But usually our players go off and spend 200 hours doing whatever they like, which we don’t know about!