Fallen London rings in another year. Christmastide – and the customary covering of ‘snow’ – is set to fall upon the city once more. 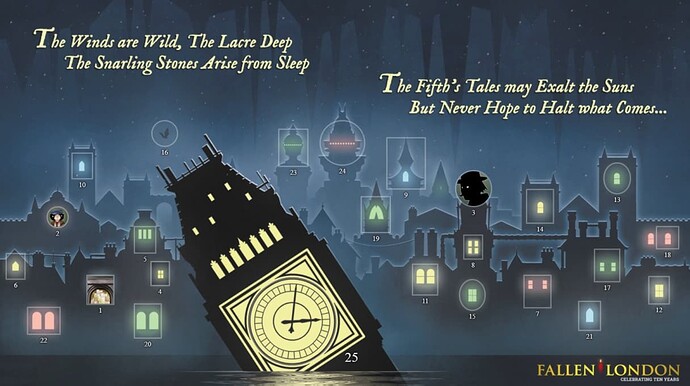 From today until the 25th of December we’ll be handing out advent treats via the Fallen London Advent Calendar.

Each window will give you a snippet of Yuley narrative, and something besides: trinkets, magpie-treasures, and occasionally, something rare.

Each will expire after a minimum of 24 hours; so collect them swiftly.

SNOWBOUND! I happen to be stick inside my Lodgings, which is altogether much more convenient.

Also it looks like the Regiment is back with Sacks’ sack, but it’s not quite released yet. Is there any official word on this?

I don’t think we were supposed to see it. Someone forgot about it!

Uh, that item is something! Wonder what FBG is trying to tell us.

Upcoming Irem-related content or it’s literally just bait to get the fandom speculation going for a while.

Would anyone have the Echo for Mr Veils a Second time if you haven’t done Bag a Legend? I’m a sucker for Masters content and I’m just a few actions beyond the lock out.

Veils a Second Time, from a Heart’s Desirer.

Can I interest anyone in a slightly used diatomist’s array? I seem to have a spare.

I bent my Fate and forced master to serve me as janitor. After that he was such touched that gave me an opportunity to receive a present from one of the masters. Of cause I choosed the most well-respected and glorius master – Mr. Eaten. Result was… a bit unexpected

But at least I received the shiniest christmas present!

I love that they’ve reused a few older codes for the advent calendar this year (like today’s for example, which has only been seen in 2014 and 2016 before [yes, I do keep an archive of advent calendar codes

There’s been a great many nice ones over the years and this way newer players get to see them, too!

Time the Healer just cleared my remaining Christmas Cards, even though the game instructions under “Send a Christmas Card” very clearly state:

“You will no longer receive Christmas Cards from Time, the Healer. You will be able to send them until 31st December.”

It says nothing about TtH clearing any remaining Cards before Dec 31!

I’m going to send a report, but consider this a warning if you currently have any leftover cards and TtH is drawing near…

Mine do not appear to have been cleared, if that’s useful information.

Mine weren’t affected either, so probably a bug.

The new Investigation this year is working with Lettice! I’m very excited.

The description of the reward is duplicative with several other items, but for the Fate these are meant to be small stories with small rewards. And anyone who missed out on GCO will not have another opportunity to grab Suspicion reduction in that slot (which can save you from a Heist gone bad!).

Time the Healer just cleared my remaining Christmas Cards, even though the game instructions under “Send a Christmas Card” very clearly state:

Hmmm, both my alts lost their cards just when they were about to help a random fellow.

The new Investigation this year is working with Lettice! I’m very excited.

I see a lot of people are, but the reward ain’t that big for some players. I’ll just hold until the item/story is revealed to judge if it’s worth buying it.

Indeed. That slot is already well filled, Artisan-wise (I confess to such considerations…) My problem is remembering the ones I’ve played in the past. The only one I know for sure is my perpetually festive rubbery friend.

Support confirmed it was unintended and reinstated my cards!