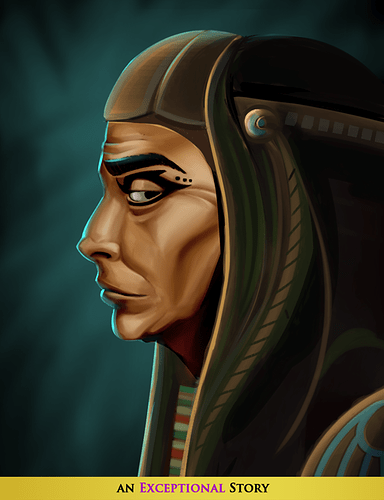 [color=#cc0099]Accept an invitation to a secret party from a mysterious acquaintance. Navigate a sinister game of hide and seek and survive the horrors of charades. Explore a manor hiding a greater half. Will you uncover the hidden history of the Second City?

The Attendants is the third and final story in the Season of Ruins, and was written by James Chew. This season, experience three stories involving the cities that fell before London. You can begin each from the Season of Ruins: Tormented Dreams card.

At the end of the season, players who have completed all three will take a step further, unlocking bonus content concerning the Manager of the Royal Bethlehem Hotel, and the thing that has taken roost in his oldest dreams.

Finishing all three stories in the Season of Ruins will make you eligible for an additional opportunity, to follow.

If you want to keep an Exceptional Story beyond the month it’s for, you must complete the related storylet in the current Season’s card throughout London. This will save it for you to return to another time.[/color]
edited by babelfishwars on 7/27/2017

I haven’t finished this story yet, but so far it might actually be my favorite! It has nice new mechanics and actually gives something approaching the sense of being hunted.

Having finished it, I have to say everything except the final choice was phenomenal! This probably is my favorite ES, just everything about it is amazing. But the final choice seems strangely limited to me, I wanted to ask the other’s opinions, or convince only a few to come back with me, not all or nothing. But that is a minor gripe in this story.
edited by suinicide on 7/27/2017

Beautiful writing so far… and the &quotEva Green in Penny Dreadful&quot art was a spooky surprise.
I think it is the one that drew me in the easiest, and I liked how it gave you a choice as to why you are embroiled in this particular escapade. Onwards to the rest!
edited by Jolanda Swan on 7/27/2017

[quote=Jolanda Swan]Beautiful writing so far… and the &quotEva Green in Penny Dreadful&quot art was a spooky surprise.
I think it is the one that drew me in the easiest, and I liked how it gave you a choice as to why you are embroiled in this particular escapade. Onwards to the rest!
edited by Jolanda Swan on 7/27/2017[/quote]
Aaaah, c’mon! I decided to go with SMEN and use the Winking preparation part after the Feast as I have to many Tears which will be used for the Noman tattoo. This all means that it’ll be best to stay away from ES so I won’t lose more items (hoarder here)!
But that beginning sentence…! :( :D

[quote=Skinnyman][quote=Jolanda Swan]Beautiful writing so far… and the &quotEva Green in Penny Dreadful&quot art was a spooky surprise.
I think it is the one that drew me in the easiest, and I liked how it gave you a choice as to why you are embroiled in this particular escapade. Onwards to the rest!
edited by Jolanda Swan on 7/27/2017[/quote]
Aaaah, c’mon! I decided to go with SMEN and use the Winking preparation part after the Feast as I have to many Tears which will be used for the Noman tattoo. This all means that it’ll be best to stay away from ES so I won’t lose more items (hoarder here)!
But that beginning sentence…! :( :D[/quote]

I am not certain I follow! I have not lost any items so far - is Eva Green up to something particularly sinister that I am not aware of?

I’m still making progress in the story but I have to say that I absolutely loved the reaction to the Amateur’s esoteric theories: “Of course the Second City wasn’t stolen by cats!”.

It’s not often that a line in the game gets me to literally laugh out loud :-)

I have to say I enjoyed this. Honestly I’m here for the lore, not necessarily the &quotgameplay&quot, so I really appreciate the story of Parabola. Seriously, important lore. Anyhow, is there a trophy item for this line? I’m back in London and I don’t see anything… which is worrying considering how that’s a usual thing for Exceptional Stories. But eh, maybe there’s an epilogue. Also, I think we have the answer to one of our Mysteries here… But that’s just me.

What happens if you get caught?

Also, what happens if you perform the Ritual on the Assistant? I did not have it in me.

If you get caught you will be dragged to the end of the story. You will miss anything in the mansion that you do not already have.

The ritual gives the most accurate and interesting translation (though I’m afraid I don’t have a link) and the assistant gets her voice back in the end. Though she’s rather upset with you.

What are the exact consequences of doing the ritual on her versus not doing it?
edited by Jules Asimov on 7/27/2017

Spoiler tags are made by writing: [spoiler*] before the text you want hidden and afterwards writing: [/spoiler*] just without the asterisks.

I am not certain I follow! I have not lost any items so far - is Eva Green up to something particularly sinister that I am not aware of?

PS Still loving the story and atmosphere![/quote]
I’m talking about this SMEN step which means that if I carry on with ES all those lovely items will be lost. But your first sentence referred to Penny Dreadful (series) which I found it great!
edited by Skinnyman on 7/27/2017

I ran out of actions just as I got to the end of hide and seek part. Slightly disappointed that the fact that I am absolutely hammered made no difference so far. Though my character always knew how to hold his liquor XD

My favorite part of the story was passing the six gates and finding out what happened to the six daughters of the Pharoah of the Second City. Some of what I say below will be theory, but most will be factually correct based on what we as veteran players know already.

The daughters, except the fifth, built a refuge from the Bazaar in Parabola after they kept it and the Masters imprisoned for a long time. The Masters were obviously pissed off and they had to flee their wrath and never made it back.

The first daughter fled to the Surface and died from being exposed to the Sun. My theory is that she did this to spite the Bazaar and go out on her own terms.

The second daughter fled to the Mountain of Light and hid beneath it. My theory is that she is involved with the Prison of Flint and the Thief-of-Faces somehow, but that is wild speculation on my part since we don’t know mush else about the Mountain right now.

The third daughter is obviously the Duchess considering the symbol of sacrifice is a cat and her gate has a poison green indent referencing that she intentionally poisoned her husband to lure the Bazaar to the Second City. A surprising revelation here is that she is in fact the hostage of the Masters and not simply hiding from them like I thought she was. The Masters are likely keeping her hostage to spite her surviving older sisters and keep them from further interfering in the Bazaar’s business.

The fourth daughter is the most vengeance driven of the sisters. My theory here is that she is hiding away as the head nun of the abbey you visit in Bag-A-Legend considering the picture used for the Gate of Vengeance. Her gate being called midnight black and midnight cruel makes me think the Vake/Mr Veils especially since he masterminded the doom of the Second City by negotiating with the God-Eaters.

The fifth daughter we meet in the story. She was a High Priestess and is building the temple in honor of sisters. I don’t really get why the hollow in her gate is large and savage.

The sixth daughter is also dead. Though I’m not sure exactly how she died since I don’t really know where the House of Feathers is from in the post below. Regardless, I still think she has some link to the Red Handed Queen due to the gate being &quotred as the death of queens&quot and her having an extremely powerful presence in Parabola. My theory is that her spirit became the Red-Handed Queen.

As much as I love your theory, the oldest daughter died in the house of feathers, so she is not connected (probably) This also means the daughter under the mountain is still alive.

I love this story. The fate of the six daughters of Pharaoh and the reflections of a long-gone city. It reminds me of Calendar Code and Gift, for the use of deduction and speculation. A very delicious puzzle game with charming writing and tension-building mechanics. One of the most enjoyable stories for me.
(Is the menace of A Stiff Drink an entirely new thing? I haven’t met or noticed it before. I kept drinking and drinking all the way during the party and throughout the squabbles, but nothing terrible happened except &quotA Stiff Drink has not changed from 6 because it’s higher than 5&quot. Just wonder if there is something hidden.)

Some speculations and questions:

For the gates and stones:
1 Sacrifice - &quotwoman at the head of six, walking alone into a dark temple&quot, probably the FIRST daughter Meritaten.
2 Priestess - the one went to the back of mirrors, and explicitly the SECOND daughter Meketaten.
3 Vengeance - the third of sixth, Ankhesenamun? And &quotridiculous trials&quot, a hint of the Sisterhood?
4 Hostage - definitely our Duchess. If the signature in Calendar Code is true, she should be the SIXTH daughter Setepenre, but if we follow the sequence, she should be the FOURTH daughter Neferneferuaten Tasherit. Puzzling.
5 Pilgrim- &quotthe fifth of six&quot, Neferneferur.
6 Lost - the last chose to stay behind, which could not be found even behind the mirrors. Setepenre?? And the sixth is the only white linen covered stool. But I still prefer the theory where the Hostage (the Duchess) is Setepenre, because the signature evidence in CC is stronger and in Bag a Legend there was &quotKept the youngest sister hostage while the rest of us ran for it&quot. Any tricks or misinterpretation?

Descriptions of the sixth stones: 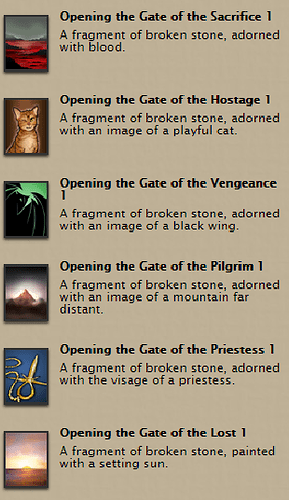 This is the sequence which I guess might be an inverted &quotsequence&quot and some of them have been proved in the texts: 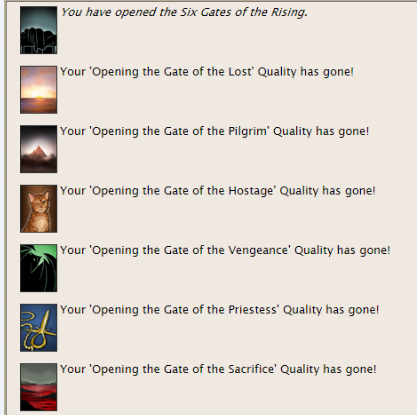