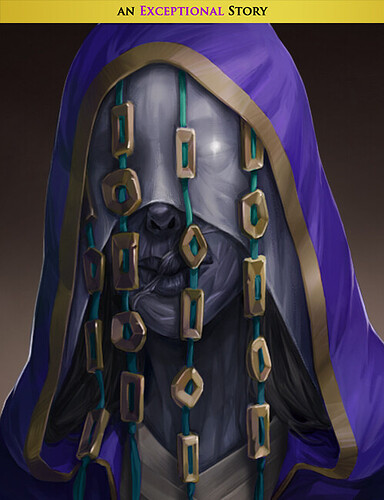 Jeesus, this poster! I love it!

Please pop a message if this story contains any unusual qualities or item requirements. I need your help to update the (already known?) sheet; here’s the forum post for more info.

I don’t know if I made the right choices, but if I were to do it over I would do the same way again. Except, I wouldn’t make a promise to the Celebrant. I should have known I wouldn’t keep it; I can’t stand not knowing.

The themes of mortality and endings are enough to give me pause. The nature of death in the Neath is something that was touched on in Older, Not Wiser, but I like this treatment of it better. An escape from the Far Shore! A return to the Surface, and sunlight, even if only to find out how you would have died. Such melancholy yearning.

I think Moonlight is now officially my favorite Mystery of the Neath. Not Parabola, not the Red Science, not the Liberation, not even the adorable Rubberies with all their wonderous tentacles. There’s even a name for it now: the Should-Be. Which I shall dissect eminently.

[spoiler]I hope someone with more knowledge around Seeking might hypothesize the deal between Wines and what I assume are the Third-City priest-kings who ate Eaten. In particular, that the dreams of Wines are collateral for an agreement. Poor Wines, wishing he were a poet instead of an alcoholic, but he’s also a two-bit huckster so screw him.

What the heck is moonlight?

We’re given theories by a character, and generally such info in FL is unreliable. Still, the Should-Be follows the same pattern as the Is-Not for Parabola, so I’m inclined to give it a little weight. A view of what the Surface should be like if the Neath were not there. But this bears some examination.

Here’s my take: Moonlight shows the Should-Be, which is not the same as the Would-Be. Our history in the real world is the Would-Be, what would have actually happened in the absence of the Neath. Both what happened in our world, and what happened in Fallen London, are considered mistaken or flawed in some way. Moonlight shows a correct to those mistakes. Beginning, of course, with the absence of the Neath itself, since that was a sin.

More importantly, it shows one particular idea of what should have happened. The Moon’s. Obviously we’re dealing with the Moon’s light here, but we’re also being told that there’s no true Light from other Suns getting in the way. I don’t know what the Moon’s whole deal is, but it’s using reflected sunlight. And also, if I’m understanding things right, came out of the Earth from where the Neath currently is. So I guess the Moon isn’t really on-board with Law, and when it gets ahold of Light it uses it for different ends.

The fact that our real history is not what the Moon believes Should Be what happens, could be the result of a disagreement between the Sun and the Moon on the proper order of things. My inclination is to believe that human agency makes history take a turn away from what the Judgements believe is proper. That’s their problem, not ours. I have nothing to back up this belief other than just wanting it to be true.
[/spoiler]

Don’t you mean the &quotFor&quot option? ;)
Fallen London for the Love option.

I enjoyed this one a good bit. Like I said on the sub-reddit, it lacked the sense of personal danger that the best stories have, but it has everything else I need from an excellent FL tale - eccentricity, excellent writing, meaningful decisions and no obvious &quotright&quot path.

I liked this one. If I replayed it though, I’d destroy the dance. Especially with the note from the celebrant at the end.

Well I destroyed the dance, but I fear I may have skipped a story let because it seems the celebrant doesn’t really say anything after the sabotage… All I get is a mouthful from Mr wine’s and a sinking feelling I’m the bad guy
edited by Anagram on 4/1/2022

I think the only part that confused me is this: Why, if you want to die as if you were on the surface, wouldn’t you simply travel up the Cumaean Canal and… die on the surface?

As always, I am heavily biased by my Sunless Skies playthrough leading me to view true death as, objectively, an awful and horrifying fate to which any escape is preferable. The knowledge that the Sapphir’d King WOULD strip the face and name from those poor tomb-colonists and devour them at his table, or that something similarly awful likely awaits them if they ended up at some other regent of death’s domain, was enough for me to sabotage the whole process with no regrets-and sunder the Totentaz too-when I suspect there it was meant to be some sort of dilemma.

Which made the twist at the end fall flat for me too, because I was expecting something to eat their souls anyway.

I was half expecting to die myself at the end of the dance, maybe have an unusual chat with the boatman. Without the sunless skies experience, I had no reason to consider true death a bad thing. And who was I to stop these people? It was their very clear choice to participate.

As always, I am heavily biased by my Sunless Skies playthrough

Could you perhaps put a spoiler block around the description of endgame Sunless Skies plot, please?

We Deathlings have it rough in Fallen London

I think Moonlight is now officially my favorite Mystery of the Neath. Not Parabola, not the Red Science, not the Liberation, not even the adorable Rubberies with all their wonderous tentacles. There’s even a name for it now: the Should-Be. Which I shall dissect eminently.

I think I agree, though I’m not as steeped in the lore. I think it comes up in the Martyr King’s Cup ambition in Sunless Skies, or at least the initial bit to unlock that is heavy on moonlight, so that might be a decent place to look for more information.

[ul][li]Most importantly, we know what happens in real history without the Neath, and it’s not the Revolutionary overthrow of the Monarchy like we see in Cut With Moonlight and Noises From Upstairs. So it’s not just a view of what would have happened without the Neath.[/li][li]Heretofore, there has always been a single, coherent alternate history advancing alongside history in the Neath. The Celebrant is shown to have multiple deaths. I can’t reconcile those, except that it’s been a long time, and perhaps multiple intervening Falls has an effect.

[/li][/ul]
I think the fact that it’s referred to as the &quotShould-Be&quot also implies that generally there would be a singular truth. I could believe that was just a goof in the writing, or that it’s a result of the Totentanz having a very specific purpose to kill the people performing it.

Also, based on your discussion, I take it that there aren’t other Exceptional Stories than the ones you listed that feature moonlight heavily? Just by coincidence I played them almost back to back, and it was an interesting loose trilogy.

My own personal reference in terms of the Upstairs world is The Grasshopper Lies Heavy from The Man in the High Castle. Though I’m not sure how that would apply hear, from a metaphysical perspective. Maybe the idea that the Upstairs reflects the collective unconscious’ expectations for what the world would be like if London hadn’t fallen. Though given how it seems like the everyone attributes increased revolutionary activity to one of the great powers suddenly having a drastic change in circumstances, you’d think the collective unconscious would expect things to be calmer if London hadn’t fallen. :shrug:
edited by rngwrldngnr on 4/14/2022

[quote=Anagram]Well I destroyed the dance, but I fear I may have skipped a story let because it seems the celebrant doesn’t really say anything after the sabotage… All I get is a mouthful from Mr wine’s and a sinking feelling I’m the bad guy
[/quote]
Well, of course you’re the bad guy. Mr. Wines always has kept its word once given. it won that crown and scepter in a truth-telling contest at a church carnival two towns over.

Though I’m just at the start of this, I’m really enjoying the witty, playful language. Just within the first couple of paragraphs: &quota saviour to savour&quot and &quota sorry soirée&quot. If it goes on at this pitch, then Matt Diaz will be one to watch and hopefully bring back for more.

Oh man, one of those terrible decisions I knew I’d feel godawful afterwards no matter which way I’d choose…