An Open House at The Gallery of the Bazaarine 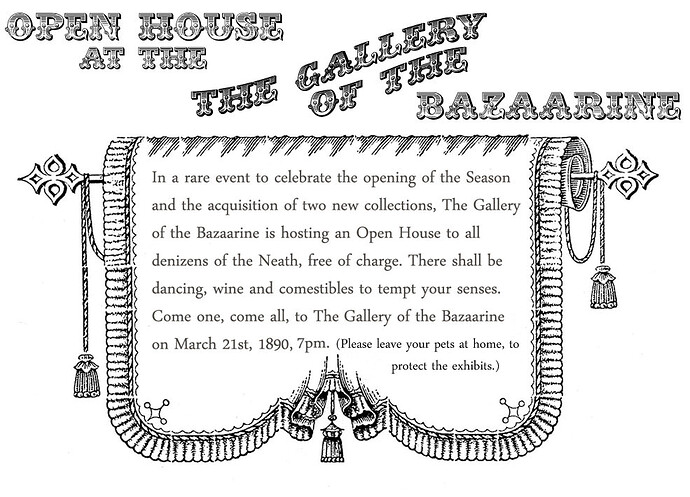 [Occasionally, we have “RP Parties” where an event is hosted for numerous people to engage in threaded RP. Often it is themed (Christmas, Halloween, birthdays etc.) but sometimes, it is just a reason to try and get people together for interaction when twitter is quiet, or give opportunities for people on different time zones to interact where they might not usually get to.

Because these events take place on Livejournal posts, it facilitates interaction between two people at a time in threads (sometimes three at most) to encourage people to get to know each other’s characters in a social atmosphere. Since there will be interaction with many different people, remember that the other character may or may not have played through some content, or may not embrace the same sensitive topics. We invite you to discuss OOC what would be spoilerage and whether that would be upsetting or not. (i.e., I don’t mind spoilers, but my character has maxed out stats and has played many of the storylets.) For an example of threaded event RP, check out this recent birthday party. (It’s large…)

So that being said:

The Fallen London community is planning on having an Open House, available for anyone looking to dip their toes into the world of EBZ-RP, or want to dive more deeply than they have already. The post will be put up the day of March 21st, probably in the morning (Central Time in the U.S.) and people are welcome to join whenever!

Come play with us! ]

Hoping to see some new faces at the party!

A deep red envelope arrives at the Gallery, sealed with grey wax, pressed with an elegant ‘E.’ When it’s opened, the smell of roses delicately perfumes the air around it. In Eris’ loose, graceful hand, her reply is penned.

You know I’ll be more than pleased to attend. Do let me know if you’d like to make use of my cellars.

As a note, this party is likely to separate into two LJ posts: one for discussion/interaction while mingling, and one for dancing. In addition, we’ll have some other information available as we get closer to the date.

Looking forward to meeting new people. If you feel like RSVPing, I suggest posting over at the LJ community.

As a reminder! The Open House is to happen on March 21st! We look forward to seeing new people there!