My question is this: Can we could have a non-spoiler thread (No story content discussed) that could point players in a general direction when it involves items or companions that are part of Fate locked paths or events? More to the point, A simple list of Fate locked stories along with what rewards are available for playing them. (Possibly with a list of recommended levels and items for completing them)

Note: I am well aware that fate locked content is not to be discussed (for good reason), however I am sure I am not the only one who would be far more inclined to buy and use Fate if I had a general idea as to what the long term goal would be. I don’t want to see any content or stories spoiled because of something like this, but Instead have a point of reference before taking the plunge of dealing with fate.

I second this. Deciding to buy into something fate-locked because it looks like it might be interesting is one thing, but knowing that a particularly useful reward awaits at the end of a fate-locked section is certainly also a factor in such purchases.

Basically, I don’t see how a ‘directory’ like this could HURT the game’s cash-flow - if anything, it’s more likely to make some people go “Oh, I had no idea you could get THAT! Better buy some Fate and go grab it!”

I agree completely. Having some general description of the content you’re buying could only help with decisions and boost sales.
In fact, since I’m finding myself buying lots of fate-locked stories lately, I’m considering making such a guide myself in the future, and I already have a little draft.

What could be in it: general overview of the story (something close to what you can see on the NEX tab description), description of the length of story (aka 5 storylets + 5 opportunity cards, etc), general description of permanent cards (aka unlocks 1 permanent useful storylet/opp. card), general overview of the rewards and unique items (such as &quotduring the story you will receive a unique transportation item&quot), maybe some comments from the fate thread (aka &quotthe story has received favourable reviews, praising it for interesting lore and useful material rewards&quot).
What won’t be in the guide: obviously, any story text, spoilers, item names

I wonder if that would be okay. I should talk it over with FB some time. I also have no qualms about anyone making their own guide, personally!
edited by Danko on 5/27/2015

I could see it maybe preventing people from buying stories that are generally considered disappointing, but it’s not like that information isn’t already out there.
I suppose it might hurt good stories with sub-par material rewards (like The Gift) as well, but again, information is already out there, centralizing it isn’t bad. 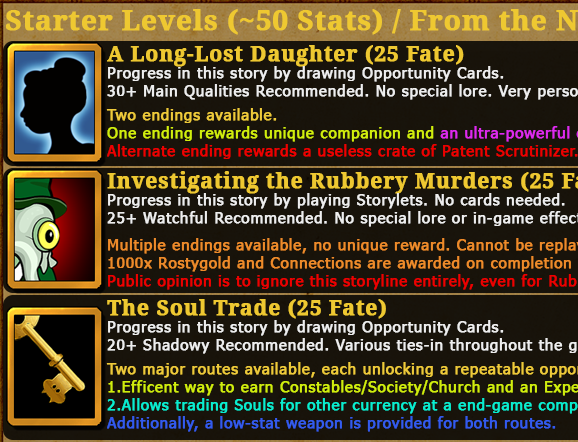 Cons: Hazy memory, Highly Subjective, Bad Grasp on game mechanics, Laziness, Cannot read between the lines (Tricked by Mr Chimes for 3 years and running), Vulnerable to Tiger-Keeper, Parabolan-Weasels
edited by Estelle Knoht on 5/27/2015[/quote]
However that is not only Fate locked content in the game, far from it.

Well, it’s always going to be subjective. As long as you allow community input though, it should be good enough. I certainly like the design!

You may want to put a marker indicating if the story is repeatable.

Would you be including monthly content? There was another discussion recently on how best to aggregate the possible rewards from it. I think the official stance was “link journal entries”, but I suspect this would be a more compelling and reliable archive.

The right half of that image is cut off for me. Is there a link where I can view the full image?

Er. It was intentional because I have barely started on making it. Sorry.

I wiill chew on that for a bit and get the regular fate stories done first, I suppose?

I must say, you make strategic use of the cut-tool. “And an ultra-powerfulSTATIC” indeed. The Long-Lost Daughter is a storyline I decided to give a miss early on, but exemplifying the point of this debate… I might go back and buy it anyway, just to get the unique companion and that ultra-powerful MISSING. :p

Honestly, I’d appreciate clear-cut outcome summaries like these for non-Fate storylines as well!
There are lots of stories I would have done differently, would have done sooner, or would not have done at all, had I known the mechanical consequences. Anything that adds a terrible opportunity card to my deck would be worth avoiding, for example.
edited by Ian Hart on 5/27/2015

[quote=Ian Hart]Honestly, I’d appreciate clear-cut outcome summaries like these for non-Fate storylines as well!
There are lots of stories I would have done differently, would have done sooner, or would not have done at all, had I known the mechanical consequences. Anything that adds a terrible opportunity card to my deck would be worth avoiding, for example.
edited by Ian Hart on 5/27/2015[/quote]

This is a big concern that’s often overlooked. I’ve spent two weeks so far doing nothing but grinding The Student Body because I sold my soul so those blasted devils would drop their card out of my deck, and the last thing I need is another one coming in to clutter the place up.

I’d definitely want this as well

Updated.
Begging for input, PM and everything you have about fate-locked stories even though I played a lot of them I don’t take notes

Currently need details on:
A Trade in Faces
Blemmigan Affair
The Gift
Bound in Diocesan Intrigue
Everything
edited by Estelle Knoht on 5/29/2015

Estelle, this is really great (and exceptionally pretty!)! I’m not sure it passes the no-spoiler rule, though. I would think showing specific endings and their rewards would be prohibited.
edited by Danko on 5/28/2015

[quote=Danko]Estelle, this is really great (and exceptionally pretty!)! I’m not sure it passes the no-spoiler rule, though. I would think showing specific endings and their rewards would be prohibited.
edited by Danko on 5/28/2015[/quote]

I agree entirely, though it is a very helpful resource.
(Just bought my first Fate-locked story today!) ^_^

This compilation is already pointing out some things I didn’t know and would have had to trawl threads for. And it does contain the same kind of information that Alexis has suggested people write into journal headings; it’s just that it’s an image rather than a set of links to journals. I mean, would it really be better (even if more kosher) to compile all this info into a series of links like this: http://fallenlondon.storynexus.com/Profile/metasynthie?fromEchoId=5812202

By the way, could some kindly individual PM me with the details of the relicker-replacing choice of the face-tailor story? I’d like to know how much scrap the action produces (and if there are any other side-effects).

I appreciate the work that’s gone into this, but images are a really unfriendly way of transmitting information; can it please just be text?

I like the images, and the coloured text does help with readability. Thumbs up.

I’m just really annoyed with myself at not keeping notes, or I could fill in a lot of the blanks. Oh well.

I’m done with all the Fate locked content, so I can’t report any of the ending rewards. I could head back to Flute Street and compile all the rewards available there, if that is something worth considering.
I do have all the animals (including the owl) from Empyrean Redolence, if that’s something you need.