Came across this artist’s latest exhibition, and immediately thought “I wonder if he plays Echo Bazaar? Fairly Tame Sorrow Spider, anyone?” 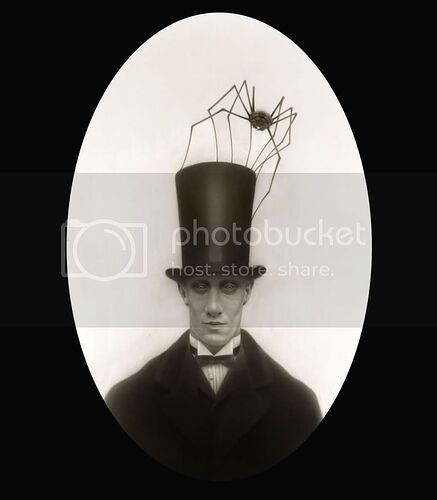 Herman and Morris
20×15 acrylic on board

Herman found his prized huntsman spider in the basement of his parents’ house. It followed him where ever he went for most of his adult life. He named it Morris because it reminded him of his Uncle Morris, who had long spindly legs and a strange gait that often confused people as to which direction he was about to step in.

Although it was common to have large insects as pets, in Rothbury, England(circa 1875). It was frowned upon to have an arachnid as a pet. When they would go for a stroll or take in a show at the theatre, Morris would hide in Herman’s stovepipe hat and watch through tiny holes near the top of the hat band. Herman could even hear him clapping at the close of the each performance. It made him laugh out loud every time.

This looks marvelous!
I hope that’s not an Exceptional Hat!

Hah, that made me give an involuntary little shudder but it’s quite a lovely and appropriate picture.

The story is very neathian.

I… actyually knew abot this artist beforehand and cold recognize his style on sight. I am such an art geek…