A few bugs and suggestions

First of all, I want to say that I really love Sunless Sea and its awesome universe. I’ve played it quite a lot (seem most of the content and story/quest lines) and there is a few things I wanted to share.

Some of the things are obviously spoilers. Also I haven’t played a lot of Diamond yet, so maybe some of these are fixed.

[ul][li]When you explore the Nocturne, you can repeat ad nauseam &quotexplore the cargo&quot (or similar name) that gives you 1 Zee-ztory or rarely 1 Lamentable Relic, giving you infinite amount of these.[/li][li]The stat improvement on officers (for one secret) should work on the base stat, not the modified one. Many weird things can abuse this (for example equipping negative stats bonus officers or equipments and removing positive bonus ones). This should probably be the same for the events that only upgrade stats up to a certain point.[/li][li]Also, when you upgrade a stat with an officer, could you please make it so that it comes back to this officer discussion page again? It’s very tedious when you want to spent 10 or 20 secrets at once… Thanks![/li][li]Most of the ships are pretty useless right now, except the cargo ship. They need rebalance.[/li][li]Also, you don’t know the slots each ship has before buying it, which is pretty annoying.[/li][li]Also, the ship weight seems to be useless (as in &quotnot used&quot), and the engine power effect is very weak (I tested it some time ago, with the 2500 power engine on and off, and it only change the speed of 10 or 15% iirc).[/li][li]The &quotobscure energies&quot property of the high-end ship lamp doesn’t seem to work properly.[/li][li]Since the Diamond update, you have no information on the stats of the gun in the shop anymore, which is a bit annoying.[/li][li]It would be better if the hunger/fuel/terror mechanisms worked on finer granularity. Examples: For food, having 20 or 25 crews (10 or 12 food/tick) consume the same amount of rations, because it resets to 0 when it reaches 50 or more (after 4 ticks, it’s 40 vs 48, after 5 both reset to 0); For terror: you can switch on and off the light with the good timing (just before the terror would increase) to save fuel, which is a bit dumb.[/li][li]The Zee-Bat Search doesn’t find most of the new ports, even if they are active (have a shop and/or some quests).
[/li][li]Happened once, in the Fathomking’s Hold, the special background didn’t left when I tried to leave the dock (had to reload).[/li][li]Request: could we have some storage in London to store items and ships? Especially ships… I’d really like to have let say a cargo and a combat ship available without having to pay 15k echos to switch![/li][li]There is still some debugging content at Nuncio (Reset for testing, get infinite Blemmigan, but they’re useless anyway :p …)[/li][li]Edit: the merchant ship pathing totally bugs out when encountering an island.[/li][li]Edit2: When submitting some reports, especially the iron republic one, you’re taken back to the Fallen London screen instead of staying to the &quotSubmit reports&quot screen.[/li][li]Edit2: Also, still for reports, some of them keeps telling you that you got a new achievement &quotsurveyed …&quot even if you already have it.
[/li][/ul][/spoiler]
edited by Darkas on 1/7/2015
edited by Darkas on 1/8/2015

Oh, is there stuff in Nuncio now?

>Also, when you upgrade a stat with an officer, could you please make it so that it comes back to this officer discussion page again? It’s very tedious when you want to spent 10 or 20 secrets at once…
Yes, please! Actually, there are several places in the game where &quotPerhaps Not&quot or checking your Gazetteer tabs resets you – I’m thinking Visage and Varchas. It’s more of an inconvenience than a problem in Varchas, but since Visage requires Something Awaits You to enter, that basically means if you check your Gazetteer tabs in Visage, you get kicked off the island (while keeping your mask!)

>For terror: you can switch on and off the light with the good timing (just before the terror would increase) to save fuel, which is a bit dumb.
I dunno, makes sense to me. Sometimes I do that with my phone or my laptop backlight when I’m trying to navigate through a dark room :P

>The Zee-Bat Search doesn’t find most of the new ports, even if they are active (have a shop and/or some quests). [maybe fixed]
Its sense of direction is also seriously out of whack, at least as of pre-Diamond (didn’t check since then). I’ve had it tell me something was, for instance, &quotfar to the south&quot when it was actually due east or something.

Oh yeah, you’re totally correct on your last point, forgot about that.

> […] you get kicked off the island (while keeping your mask!)

Same for the Fathomking’s Hold, when you talk about your father’s bones, you can leave the screen by mistake, option that is actually not possible if you don’t have this story (you have to select an option to leave the Throne-Cyst).
edited by Darkas on 1/7/2015

> Also, when you upgrade a stat with an officer, could you please make it so that it comes back to this officer discussion page again? It’s very tedious when you want to spent 10 or 20 secrets at once…

Oh, was there an update?? Yessss. I hope.

edit edit: I’m liking the more organized Journal stories, but now that there are so many categories, you know what would be nice? The ability to completely minimize some categories (so three states: minimized, icons-only, and expanded). Also, shouldn’t Admiralty Commission and Cargo for the Cheery Man be classified as Objectives?
edited by Fretling on 1/8/2015

A few new bugs since the last update:

[ul][li]Frostfound and Crying Heights are not recognized as land (you get terror near them).[/li][li]Some islands/coasts drawn on the chart do not match actual islands/coast lines.[/li][li]The Zee-Bat Search has a new bug (written directions are still wrong): some locations still get detected by the search even if you have already explored them, especially the Fathomking Hold. Some location are still not detected at all, such as Pigmote Isle.
[/li][/ul]

Being able to see the gun stats again would definitely be nice. Actually, I was under the impression that the iron bonus from the weapons was completely removed? It certainly feels that way :/
Having a place in London where you could store some of your stuff is also something I would be glad to see. Maybe after purchasing a bigger house, or being able to buy storage at the docks or something.
The AI is still buggy as hell. The enemy ships sometimes don’t fire at all during a fight (and can’t credit my evading skills, cuz I don’t really have any), while other times they just shower me with fire, without even pretending to be reloading. Unless all non-player ships have 3-4 Deck slots, I can’t see how are they able to do that. (Then again, we all know that the non-player ships are nasty cheaters, with their magical turning skillz and what not). The neutral ships still cluster at certain locations and teleport around, leaving only a puff of smoke.

I thought the Frostfound thing was deliberate – it’s like Wisdom, some kind of floating object (probably an iceberg) rather than real land.

I thought the Frostfound thing was deliberate – it’s like Wisdom, some kind of floating object (probably an iceberg) rather than real land.

Gigantic Lifeberg, mother of all other Bergs…

And it’s moving closer to London…

Is it just me or does Port Carnelian not give Port Reports now?

Whoops, so it was here I was talking about Wisdom. Well, now that it’s been opened for business (though a little dusty-looking – I wonder where I’m meant to get what they’re after, maybe that is the key to everything else), it apparently DOES reduce Terror, so it’s looking more likely that Frostfound might eventually be intended to do so as well.

Bardigan, I need to head down there myself, so I’ll check, but I already have a Port Report of it in my hold and I can’t turn it in anywhere, so I’m not sure how that will affect things.

Would it be possible for random events like the crew eating tentacle to be reduced in frequency? I’ll be in the middle of a battle trying to fire, and then the gazette will open up again. I understand that a zee-monster could very well be lurking in one place to take a number of crew, but for this event to show up three to four times per minute on several occasions feels a little unbalanced, and I’ve also had other ones like map the new heavens pop up repeatedly, even while sitting in harbor. I can rationalize it to myself if this was intentional, but right now it feels like a bug.

That definitely sounds like something where you should send the output log in to the bugs email, because that has literally NEVER happened to me.

I’ve looked at the instructions, but I still can’t figure it out. There’s nothing in the folder that shows up :/[li]
But I’ve gotten like four crew members eaten going from Khan’s Shadow to near London, so I don’t think the event is locational?

Yeah, either the Random Number Gods hate you or something’s gone wonky. 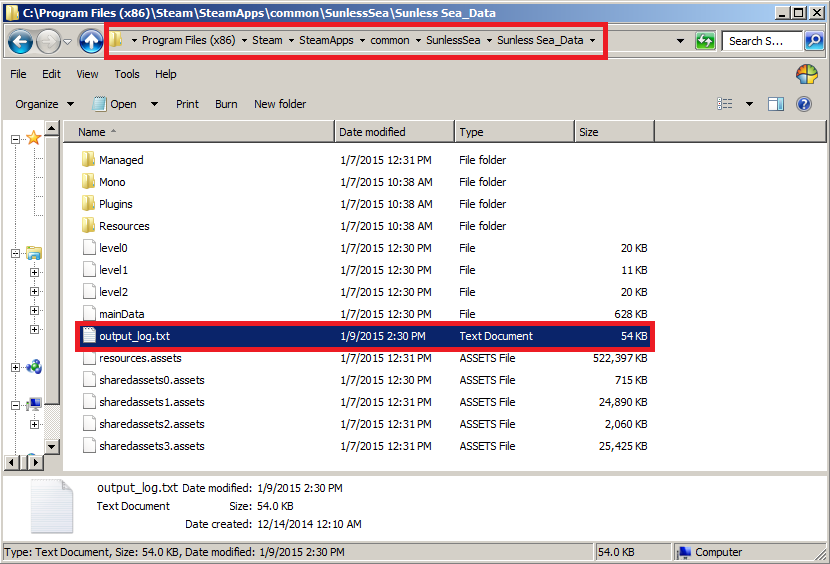 Does this help you find the file?