What Holiday's are there down here in the Neath?

Pardon my ignorance, but even though I have been a resident of the neath for a while now, I am still not up date on the customs and holidays that are held down here. Outside of Sacmass and the Feast of the exceptional rose, I know little else; and even with them I still have questions. I want to know about what other Holidays there are down here (And by extent, what I should be prepared for)

There is the Fruits of the Zee Festival at the end of summer and Hallowmas around October I believe. I don’t know much about the content that is available as I only began playing around April of this year.

The Fruits of the Zee festival doesn’t require much, as far as I remember. Last year it took a heavy toll on one’s quirks, but I’m not sure if that’ll be a case this year too. You go fishing for Strange Catches, and then you trade them in for unique prizes.

Hallowmas is a very social event where you send invites to other players to confess their sins. You raise menaces to become eligible for confessions, and at the end you decide what to do with them. As you participate you’ll gain more Spirit, and the amount of Spirit determines how prominently your article can feature in a newspaper edition talking about the holiday. There are also some other things (Hell offers some nice things in exchange for your soul around this time of year), but the social aspect is the biggest.

Fruits of the zee festival: cartography items are useful, but they’re easy to come by at the time. You quirks will be hammered whatever you do, so I’d not bother boosting them in preparation.

One thing that the Fruits festival does is challenge your patience. Consider it to be vey similar to the Fidgetting Writer: lots of luck checks, and you can still stumble just short of your goal. There are consolation prizes though.

Hallowmas: menace raising is easier if you have a starvling cat, so getting one might be handy. The big thing you want, though, is social connections. Lots and lots of them. For the best outcome last year, you needed to share confessions 500 times. They do like to shake things up, though, so who knows what this year will bring?

Is that 500 different contacts? I thought you were capped at 100. Can you confess to the same person multiple times?

Contacts are different from Acquaintances. You can have as many contacts as you want, but Acquaintances are capped. I also think it was 500 Spirit, not confessions specifically. You can get Spirit through accepting a request for confession, but what you choose to do with the confessions also gives some Spirit.

Contacts are people you’ve communicated with. You can see (and edit) the list on the right side of StoryNexus : World not Found .

Acquaintances are the players you’ve had shared Calling Cards with. You can see those listed on the Myself tab, under Acquaintance->Acquainted With…

I’ve been meaning to ask this for a while, and this seems like a perfect time - could someone please list every Neath holiday with it’s exact start/end date? Having a calendar ready will be exceptionally helpful.

I’ve been playing off and on since February 2010, and I’ve managed to miss every holiday except for a couple Exceptional Roses… with a character who doesn’t engage in romance. So a look at a calendar would be appreciated. :)

The exact dates have not always been consistent, but in short:

So other than Sacksmas, you can probably expect holiday content to last two weeks in future.[li]
edited by Jeremy Avalon on 7/15/2015

Are there any particular unlocks to keep my eyes peeled for? (Similar to the tatoo during the feast of the rose?)

Nothing as extensive as tattoos. It’s much easier to get lots of Spirit of Hallowmas if you are a Person of Some Importance, and if you’re planning on getting the cheap five-card lodgings upgrades at Christmas you’ll need to already have the relevant four-card versions and three points of Notability each (plus be soulless if you’re looking to get the Brass Embassy Sanctum).
If you play Sunless Sea and haven’t already gotten the relevant bonus from the pre-launch access codes, you will also probably want to buy a Soothe & Cooper Long-Box from the Wicket (costs five Taste of Lacre), since it’s currently one of only two ways to get one (the other being a one-time Ambition thing).

Get your Quirks up as high as you can for the Zee Feast. I seem to recall it eating a lot of them.

I know this is off topic (sorry) but I’ve heard of an event/&quotHoliday&quot called &quotRatsmas&quot. Can someone explain what the hell that was?[li]

I know this is off topic (sorry) but I’ve heard of an event/&quotHoliday&quot called &quotRatsmas&quot. Can someone explain what the hell that was? 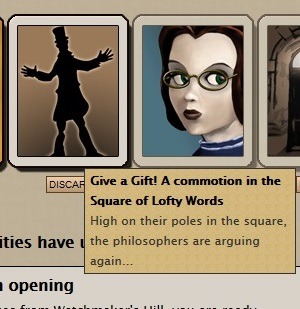 Today, the seventh of December, is officially the holiday known as Ratmas! Officially! It's a long-standing tradition, you know. I didn't just make it up! Where are you going? Come back! Okay! So!...

Ratmas 2014; postmen and non-acceptance It is the seventh of December! Do you know what that means? Well, last year it meant Ratmas. This year, I, uh, I dunno. I think it’s still Ratmas? It can be, if...