This is the oddest bug yet, or not 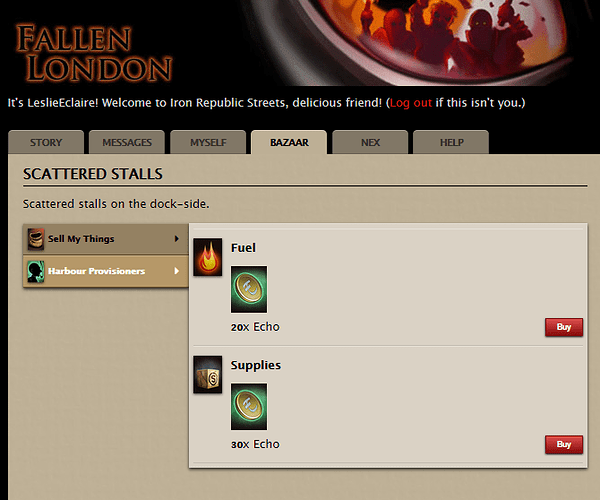 That’s definitely a bug. You can send an email to support@failbettergames.com and they’ll take care of it.

That’s definitely a bug. You can send an email to support@failbettergames.com and they’ll take care of it.

That’s a weird bug, if so. I’m curious how that even happens…

Well considering the data files for Sunless Sea have a bunch of stuff from Winterstrike and the Silver Tree (albeit, I think mostly meta-quality related stuff), there’s probably some cross-pollination potential there.

Yeah that’s not a bug.

Though I see they fixed the actual bug where Echoes weren’t showing an image for me.
edited by WormApotheote on 2/25/2015

Oh goodness, how delightfully meta! I love it.

Hey, as long as it’s intentional. I heard about this a while ago, but I didn’t remember if it was deliberate or not.

Wow, I have so much more money in FL I’m almost tempted to try this out. (But it won’t gain me time to play SS, so not really.)

If it’s intentional, maybe there are plans to implement the need for fuel & supplies for zee-travels in the Fallen London game, too?

Well the fourth wall is a theatre metaphor so…

If we assume that separate fictional worlds are like theatre or TV sets, they’re presumably laid out side-to-side, in which case the walls between them will be… what, the second and third walls? Perhaps they’re in chronological order, in which case, going from an older work to a newer one is breaking (in this case) Fallen London’s third wall and Sunless Sea’s second one. Maybe. To be honest, I’m not sure if my “many walls” theory of theatrical physics is going to catch on.

To be honest, I’m not sure if my &quotmany walls&quot theory of theatrical physics is going to catch on.

Probably not, but nice try anyway… ;)

…I swear the many walls theory is fanfic.net’s entire collection of crossover fic.

“That song has no content. It wasn’t even about the movie, it was about itself. That’s like breaking the ninth wall. It’s pointless.”

I’m not sure if my &quotmany walls&quot theory of theatrical physics is going to catch on.

What makes this great is how easy it is to misread &quottheatrical&quot as &quottheoretical&quot!

Sir Fred: bringing Brane Cosmology and String Theory into Fallen London since 2015.
edited by A B Nile on 2/26/2015

“Many worlds” is actually quantum mechanics. Though I guess branes would be applicable too, in that this theory has absolutely nothing in common with either beyond very superficial resemblance :P