The Mayor of London: second round!

Y’know, I actually expected Nitebrite to have more votes - and so I wanted someone else to get some recognition and voted for one of my other favourite forum members instead. ^_^

Edit: There we go. (Nitebrite had 0 votes at time of writing my comment originally.)
edited by Kittenpox on 6/11/2016

[color=#e53e00] All righty - this was basically an inevitability. Can we not go here?

Yes, Jenny is a brothel madam - but going straight to the edge of the line of acceptable smut is a swift way to ensure I’m going to have to hover over the forums to ensure it doesn’t cross the line and get gross. (I want to create gorgeous content for you, don’t make me sit here.)

Anyway - she’s so much more than that. She’s fascinating. Cool. That’s the least interesting thing about her.

I think that the Tiger Keeper–stern, majestic, powerful–would be the best mayor for such a hot bed of scum and villainy as Fallen London.

I don’t think they are all new nominees? Mr Apples is the same as Mr Hearts, isn’t he? That being said: no guesses whom I voted for ;)[/quote]

Hey! Don’t tell that to people, Mr Hearts is the best Master anyways, he deserves to be here again. 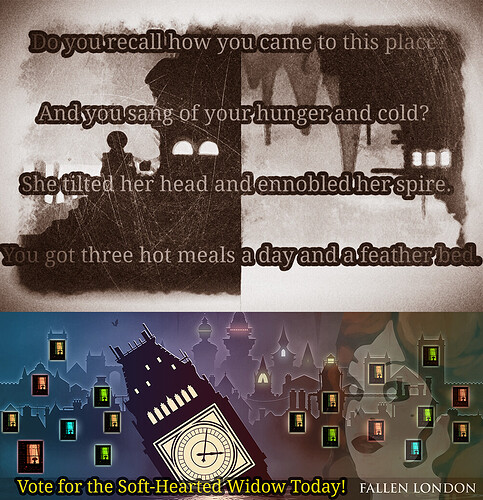 The Tiger Keeper is a good choice, but you should remember that he was just recently overthrown by his ratty entourage and his breath smell of antelope.

Given that the vast majority of the NPCs available are either evil, insane, or morons, the player characters had better start competing for my vote :P

You have won my vote Estelle. Absimiliard was rescued from the zee by a ship-captain once married to her – though he is long dead now – she is as close as my character comes to having a mother-figure in their life.

Absimiliard has never refused to give her glim to help her cause.

There is no one else they could vote for.

I must approve my own position on the list, even if I must be alarmed at the idea of maniacal seekers wishing the foul object of their desires be made mayor of London! Vote for myself and the LNP! Public Work Schemes! A reinvigorated military! Greater suffrage! And end to devilry! The 10 hour working day! Minimum wages! Legal Workers Unions! Churches built! Orphans housed!

I could vote for no-one better than the Diplomat. We hopeful servants of progress must keep our loyalties even in times of such great division.

Oh goodness, how plentiful have our options become. I am torn.
The Soft-Hearted Widow is a fair candidate, but perhaps the Duchess could bring about the return of that delightful Egyptian aesthetic sense. I just might go with the Duchess, trusting the prospect that she shall lead alley cats and tigers into finally overruling this city. But oh, how the Masters would shudder.

I could vote for no-one better than the Diplomat. We hopeful servants of progress must keep our loyalties even in times of such great division.

We are all pawns, but at least most of us have common sense here, turn back before your eyes start to change you fool!

And while we are at it, where is the Manager of the Royal Bethlehem hotel?!

And while we are at it, where is the Manager of the Royal Bethlehem hotel?!

Right, because he and the Duchess ruled their previous cities SO well :P

[quote=The Master]And while we are at it, where is the Manager of the Royal Bethlehem hotel?!

Right, because he and the Duchess ruled their previous cities SO well :P

But we can’t change our votes!!!