Have folks seen the new survey card that’s appeared in Fallen London? I have to say that I am intrigued and excited. Dev team - do you mind us discussing its contents here? Because I have to say that at this point I am torn between the first and fourth options…

For reference, the question was - which of the below projects would we be most likely to support as a Kickstarter campaign? I’ve excluded the &quotNone of the above&quot options, but they are there also. 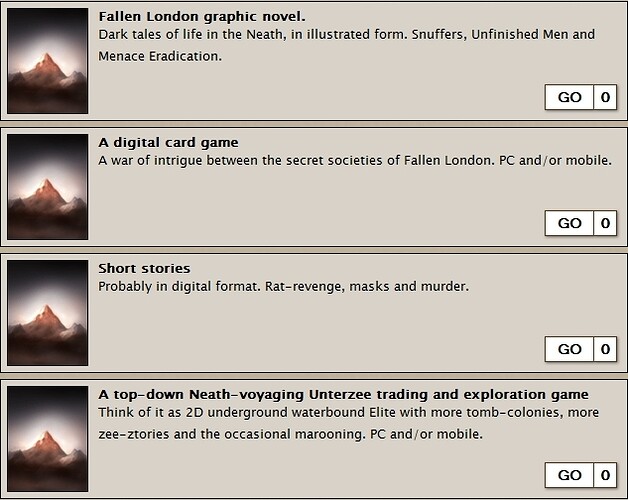 do you mind us discussing its contents here?

Yes indeed! I really had a hard time picking up only one option because each and every one of them sound exceptionally delicious!

In the end I picked a card game of intrigue, but a book of short stories would be sweet as well. And oh, to see a graphic novel published!

Long story short: whichever option comes up on Kickstarter, I am backing it up something fierce.

I’d definitely pay for a graphic novel about the Bazaar, as my in-game response shows, but on the other hand I’d rather the team focuses on the existing game, namely finishing stories like the Ambitions.

Pretty tough choice all things considered really! The only thing I wasn’t really interested in was the card game. In the end it was a tossup between the graphic novel, the short story and the zee adventure. I went with the graphic novel in the end but i dunno, if you asked me again tomorrow I’d probably end up saying the zeefaring game.
especially if you get to go North

For reference the option titles and descriptions are:

that picture in the first post wasn’t there earlier, i swear

Assuming that you mean that by all means we should discuss, and not that you do mind and by all means you will make your displeasure known - and the Northbound know what means you are capable of - then I shall say that I’m not yet able to answer the Urchin (and not only because I’m waiting to draw the card on my primary account; I think I’ve answered surveys on the others before, and that’s just muddying up your results.)

Any of the options would be marvelous… I think I’d like something with a visual component, to see those parts of the Neath that we’ve previously only read about. An Unterzee-exploring game would be right up my alley, but I don’t want to discount the marvelous narrative possibilities of a graphic novel.

It was a very tough call…in the end, I decided that the “war of intrigue” game sounded deliciously promising. The graphic novel and short stories would also be awesome, and the Fallen London Elite sounded intriguing.

I voted for the exploration, myself. I always love those games and there aren’t enough good ones on the market right now (plus I can’t wait to see what sort of terrible secrets you can uncover while wandering the Zee).

Although I would buy a book from FL in a heartbeat. I read too many books as it is, but what’s one more little does of literary addiction?

Well I’m not somewhere that I can get opportunity cards at the moment but this sounds intriguing. Agree with Sir Frederick Tanah-Chook about the visual component. I’m not sure what I will decide if(when) I get the card but at the moment it is a toss-up between the Graphic Novel and the Unterzee game.

I think the Zee exploration game sounds awesome, but I still won’t be able to vote till I deal with these four skull cards somehow

The one thing I’m kinda surprised wasn’t on the list was a point-and-click adventure game. A bit retro, sure, but it seems like it’d probably work? i don’t know i just think a point and click detective-'em-up set in the Neath would be pretty cool

also i knew it was a collection of short stories i just used the singular for… some reason. i’m good at posting
edited by Spacemarine9 on 6/28/2013

I think the Zee exploration game sounds awesome, but I still won’t be able to vote till I deal with these four skull cards somehow

Are you able to put to Zee or some other location? That gives you a different hand that doesn’t include the skulls. (I’ve currently got two waiting for me back home…)[li]

Just a note - you can receive the card out at Zee. Was pretty surprised when it turned up.

Anyways, I couldn’t decide between the graphic novel and the Unterzee game, so I split my accounts’ votes evenly between the two.

[quote=Sara Hysaro]Just a note - you can receive the card out at Zee. Was pretty surprised when it turned up.
[/quote]
Ah, right. I should’ve added that on to my suggestion. I also received it whilst at Zee.[li]

[quote=Playersideblog][quote=Sara Hysaro]Just a note - you can receive the card out at Zee. Was pretty surprised when it turned up.
[/quote]
Ah, right. I should’ve added that on to my suggestion. I also received it whilst at Zee.[li][/quote][/li][li]Good to hear that. I can carry on steaming between Islands gathering notes.[/li][li]

I chose the graphic novel option myself, though all of them potentially sound interesting. It would be interesting to see the world of Fallen London portrayed in a more traditional storytelling style.

[quote=Spacemarine9]The one thing I’m kinda surprised wasn’t on the list was a point-and-click adventure game. A bit retro, sure, but it seems like it’d probably work? i don’t know i just think a point and click detective-'em-up set in the Neath would be pretty cool
[/quote]

Oh HELL yes! I can already imagine it…I thoroughly enjoy the Nancy Drew point-and-click games, so I’d love to see something in that vein.

If a point-and-click adventure isn’t added as an option by the time I get the card (I really, REALLY hope it is, though), I’ll probably go with either the graphic novel or the short stories. The idea of a top-down game excites me greatly, but speaking as someone who’s done game coding and design, it is a REDICULOUSLY intense and frustrating process–if that sort of technical debugging isn’t THE thing you love to do, it gets tedious and irritating quick, and just ends up being a pain and a disappointment. I wouldn’t want to wish that sort of frustration on the FBG crew.

Also, for a few minutes I literally tried to figure out a way that a physical graphic novel could include Eaten content that would have the same deleterious effects on the reader that it does in-game without resorting to simple access codes or something of the sort. I’m…still pondering what exactly made me think that impulse was a good idea. :P

I wanted to pick card game. But, I’m already playing Scrolls, and I don’t see how Failbetter Games could make a better card game than Mojang. It seems really easy for card games to go wrong.