NB: According to the Forum Rules, all recommendations for game changes should be posted at: http://feedback.echobazaar.failbettergames.com/forums/25389-suggestions, however, this link is dead. As such, I thought that this forum would be the most suitable replacement, and beg the pardon of the forum moderators and administrators for this dreadful breach of etiquette. Furthermore, all the ideas contained within are given freely and with no expectation or want of anything in return. Save possibly seeing it as a reality, of course.

I have been a Neathy citizen of the Fifth City for over a year now, and in that time I have, like others before me, caught cats and fought rats, wrestled with iron boxes and black ribbons, zailed zees and robbed tombs, founded a newspaper and even a department at the University.

Indeed, during my time at the University I was pleased to see mention of that most wonderful, incomprehensible, and English of sports - cricket. It was musing on this brief cameo that sparked the idea in my mind: if we can run a newspaper, or a university department, why can’t we field a cricket team?

Through a fair bit of brainstorming courtesy of myself and other members of the Fallen London IRC, this proposal has been drafted as a possible way to accomplish this.

Several ideas were considered, ranging from drawing a card that would lead to a storylet not too dissimilar from those completed at the Bazaar Sidestreets, to a longer Doubt Street-like storyline. It is this latter idea that has been drawn out into a full proposal.

The storylet proposed would start at the Shuttered Palace, where a Person of Some Importance could be offered the chance to coach a struggling team. When started, this unlocks a series of storylets where the player would build up the team, which has lost some of its members after their last, catastrophic loss. The core of the team remains, but some members must be recruited to make the full eleven.

[color=#ffffff]- Finding Grounds[/color]
The first storylet would involve finding a small area of ground in London that is relatively free of carnivorous fungi, eye-munching spiders, thieving urchins and other such menaces, for the player to use as their pitch. In addition, a second storylet could then fund the building (or restoration of an existing building on the pitch) of a structure to be used as a pavilion.

These initial storylets would be simple barriers of payment. Cough up the usual Comprehensive Bribe, call in the Favours from High Places, and you’ll have a small little oval of mycellious turf to call your very own. For as long as you keep up the rent, at least. Of course, all respectable pitches require a shining white pavilion, or at the very least a shed that’s been painted an approximation of grey-white. Once this small matter is taken care of, the real story begins.

[color=#ffffff]- Filling a Roster[/color]
In a succession of storylets, the player will then choose the new members of the team. As with Doubt Street, when you select your newspaper’s staff, the player will be presented with two choices: either pay for a professional, or appoint one of their acquaintances.

For example, when selecting a new lead bowler, the player could be presented with the choice of paying for a retired professional from a respected team, or, if they are currently educating the Louche Devil, or the Rubbery Pupil from Mahogany Hall, they could pick them instead.

Similarly, the player may be able to convince the Regretful Soldier to pick up the bat for the occasional Sunday afternoon, or pay for the famed ‘Bellowing Gamesman’ (almost certainly not W. G. Grace), both of whom would be equally intimidating to the opposing team when fielded.

A third idea bandied around by the IRC was enlisting one (or both) of a player’s Clay Bearers if they possess the Clay Sedan Chair. The player may even attempt to enlist their Alluring Accomplice, Winsome Dispossessed Orphan, Ruthless Henchman, or similar. Sadly, the umpires would probably draw the line at the Obdurate Stallion or Ocular Toadbeast.

Once the team’s roster has been filled, the only remaining issue is getting equipment. Once again, two options present themselves. Pull strings with society acquaintances to buy the necessary supplies, or set the Working Rat to the task.

After these tasks have been completed, the player is rewarded with a new Affiliation item: their own cricket team. Based on the choices made, the item could award either a Bizarre (fielding Clay Men, Rubbery Men and Devils) or Respected (fielding professionals) bonus, in addition to Dangerous or Persuasive.

Once the fee is paid, the player will gain a quality that functions similarly to Doubt Street’s ‘Hours before the deadline’, that will count down to the end of the match.

Initially, in the days leading up to the match, the player will be presented with several storylets where they can advise their team to play fairly (utilizing Persuasive and Dangerous), or to cheat (Watchful and Shadowy). For example, the player may spy on the other team’s tactics, sabotage their equipment, field, or team-members, or even bribe their coach. Alternatively, the player may train their team harder, ensure they’re eating correctly, and prevent attempts of sabotage from the other team.

Once the match begins, the focus of the storylets would switch to either helping encourage your team, or sabotaging your opponents with considerable subtlety. For example, a Persuasive check to lay a blistering cavalcade of rules at the umpire to argue whether or not your clay man is out because he’s physically too large to fit in the wicket. A Dangerous check to get your devil to bowl out one of the opposing batsmen by a ball to the temple, or a Persuasive check to get him to seduce them for their souls during the tea-breaks. Shadowy checks to have your rats replace the cricket ball with a sorrow-spider to give the bowler a nasty surprise. Watchful checks to ensure none of these tricks are being used against you.

Providing enough of these checks (either Fair or Cheating) have been successful, the player’s team will be successful, and win the match! Otherwise, the player will have to slink home in shame, avoiding being pelted with rubbery lumps and spore-toffees.

If the player is victorious, they will receive roughly 40 echoes worth of items (representing their fee of 20 echoes, and a 20 echo bonus for being victorious), as well as an increase in Making Waves, and Connected qualities relating to their team (Connected: Society for a Respectable team, and Connected: Bohemian/Devils/Rubbery Men for a Bizarre team, for example).

Losing the match will earn the player only about 20 echoes or less.

No, indeed, dear reader! There is, in fact, more!

Victory in a match will grant the player a new quality: ‘Victory Streak’ at 1. Successive victories will increase this quality until it reaches 4, at which point the storylet changes to the League Final.

Taking part in the League Final has harder checks, making it more difficult to win, but victory in the Final will give the player a total of 80 echoes worth of items for their victory, as well as a decent amount of Making Waves, and whatever other bonuses seem appropriate. Victory or loss in the final will remove the player’s ‘Victory Streak’ quality to begin again.

Losing any match on a victory streak will remove the quality, forcing the player to start again.

The mechanics for this idea lean heavily on Doubt Street, and indeed my own initial idea was that the cricket match be an ‘alternative’ to running a newspaper. How, then, do the two compare?

After the initial costs of setting up a newspaper, the player must expend one Whirring Contraption, worth 87.5 echoes if all required items - 300 Phosphorescent Beetles, 10 Memories of Light (equivalent to 50 Phosphorescent Beetles and 1 action) are purchased from the Bazaar. The payout from producing a successful edition is then worth between 30-60 echoes, if all gained items are sold back to the Bazaar. Altogether, this averages at about 250-500 pence-per-action, ignoring the set-up cost of a Whirring Contraption.

This proposal, as it currently stands (and all proposed payouts of echoes are merely guidelines, I am not well versed in video game economies and understand that delicate adjustments are necessary in any venture), will cost the player between 20-30 echoes to start, and earn a payout of between 20-40 echoes, with an option of taking an increasing bribe, or gambling on successive victories to earn 80 echoes every fifth match. Assuming five successful matches, and that preparation for a match takes as long as preparing an edition in Doubt Street, the player will earn 280 echoes over 60 actions, or 466.6 pence-per-action, ignoring the set-up cost.

I feel that this is just a bit of fun nonsense, and I adore the idea of stern-faced, white-coated umpires discussing with the utmost sincerity whether or not the Rubbery Man’s over was invalid purely because the limb used to bowl the ball does not, in fact, contain an elbow.

As mentioned above, this also provides an alternative to Doubt Street, for players who are not so enthralled by the idea of running their own newspaper, and adds additional content for players who are equally as happy doing both. It provides further use for acquaintances and items, and could tie in with pre-existing content (much like Doubt Street ties in with Mahogany Hall and Theological Husbandry).

In conclusion, then, I submit this proposal to the community’s scrutiny, and pray you think upon it kindly. For is this not a game about London, fallen or otherwise? And is not cricket that most noble and British of pursuits? Even if the whites of the uniform do have an unfortunate habit of attracting moths, here in the Neath.
[li]
edited by Armand D’Alterac on 1/9/2014

Could this fine specimen be a member of your eleven? 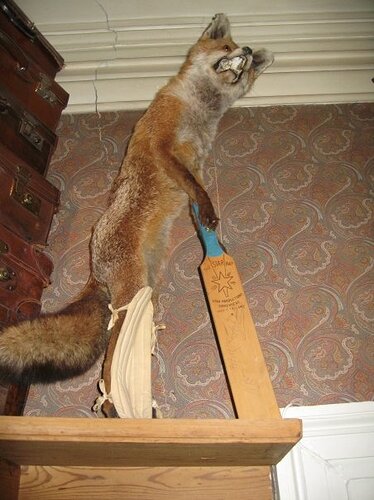 [quote=Armand D’Alterac]Could this fine specimen be a member of your eleven?

Where on earth did you find one of those? Certainly not in the Neath?[li]

Where on earth did you find one of those? Certainly not in the Neath?[li]

Apparently cricket is popular on the Southern Continent.[/li][li]

Might we be able to challenge other PoSI to ‘friendly’ matches?

I don’t see why not. Equivalent to asking people for interviews for the newspaper, I suppose. I’ll shove that in with the other ideas in the last section.