Note to self: make one of these with non-Master characters when I get home.

Mr. Irons may be my favorite. (Not counting Mr. Eaten, of course, because that’s just cheating.)

I think Mr. Wines is my favorite, actually! Tanith has attended his revels both as an invited guest and as hired help, and believe me, invited guest is better.

Also, Tanith writes country music. Or something like it, in the form of &quotnewly arranged folk songs.&quot
edited by Aberrant Eremite on 12/8/2017

That’s…sort of hilarious. I approve. 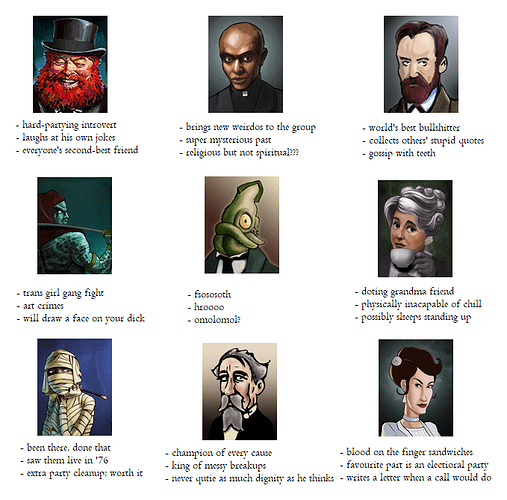 And you did, in fact, do one when you got home. And it’s splendid.

There are two I don’t recognise – middle row left and bottom row right – a hint, by your favour?

The Pirate Poet and February.

I am stunned by the sheer accuracy with Lettice.
Pirate Poet is especially good as well, though I don’t know her quite as well.
edited by Lady Karnstein on 12/9/2017

I am stunned by the sheer accuracy with Lettice.

Definite standout. I do enjoy the Rubbery Entrepreneur, though. I think he said that very thing to me the last time he lent me his soup to wear.

This is the best.