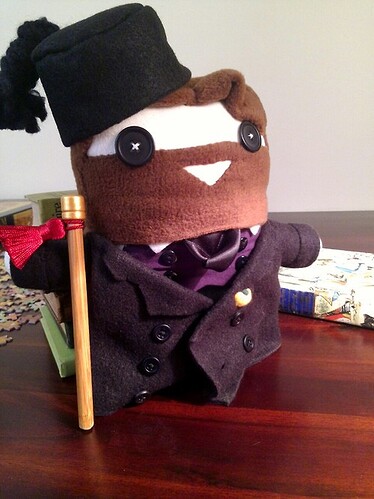 I really thought you ought to see this rather keen Sir Frederick-doll from my dear friend Jack of Squish Ghost Plus Friends! I’ll need to get him a little stand to show him off to best effect, but you’ll note his Night-Trimmed Frock Coat, Tasselled Walking-Stick, and Dilmun Club Lapel Badge. The coat is fully fastening - I tried to open it to show his tiny flannel trousers and Spidersilk Slippers, but he was feeling shy.

I do hope that the Unfinished Fez will be the next addition to the game.

It’s a touch vertically exaggerated by this new camera I’m still getting to grips with - it’s more of a smoking cap! Because my personal style icon is Guy On The Right from Manet’s Luncheon on the Grass. 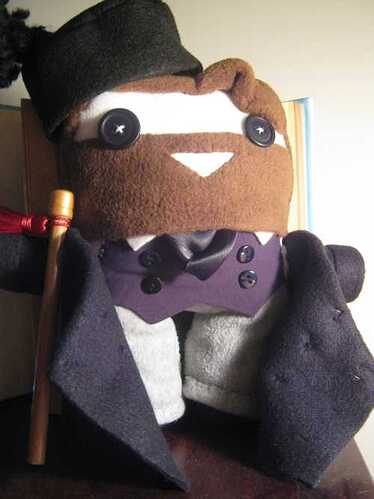 Got the usual camera out, plus managed to prop him in place by wedging him into a mystery novel!

He certainly seems cheerful–more cheerful than we would be if we had buttons for eyes. We suppose it’s better than the alternative, however; one can only imagine the eye-strain that would come from having one’s eyes bounce around whenever one turns one’s head. Not to mention the manic intensity that a good googly-eyed stare can manage.

What a marvelous likeness! :P