There are lots of opportunity cards in the game where you make a choice between two factions who like you, generally the choice pleases one and annoys the other, or there’s the expensive thiurd option that makes them both happy.

I’ve always seen these, and done plenty of them. There’s also quite a few factions i’ve had no interest in.
But recently, i started making friends with the urchins, whom i’d never gone near before. More as a natural consequene of finally levelling my shadowy a bit. And i started seeing a swath of new cards popping up. Stealing a cannon at the docks, a child selling his soul, etc.

I’m wondering what else i’ve missed.

Does anyone have a list of all these opportunity cards, and the pairs of factions involved in them ? Tracking them down across the wiki one by one would be painstaking

This is very very out of date in places (particularly related to Criminals), but it does list the cards. My biggest surprise was related to the Rubbery Men, as they’ve the most faction cards.

It’s also maybe of use saying here that it can be worth playing factions off against one another. Playing a conflict card one way the first time and then vice versa the next. Yojimbo style. - As the increase in relations with the one you favour is (usually?) greater than the decrease with the one you scorn. So over all you will build up a net gain in relations.

Also if those cards are annoying you (because you want to draw other cards more useful to you), you can decrease your relations with the relevant factions below the thresholds for the conflict cards to appear. You can do this by calling in favours with the factions in question for various goods (the opportunities for which are dotted around London.)

oh, theres only ten according to that page. i was hoping i’d missed many more :(

There are in fact 12 cards. You probably missed “The Acacia and the Butterfly” and “Crime or punishment?”

I have found these so far:
Choosing to save either a rubbery man or a tomb colonist from a fire (rubbery men, tomb-colonists)
Kicking bohemians out of a church or securing their work (bohemians, church)
Playing a prank on the church as requested by a devil (church, hell)
The urchin cannon thing (urchins, the docks)
Helping a high society member get to the tomb colonies (society, tomb-colonists)
The rubbery thefts that are baffling the constables (constables, rubbery men)
The exchange of a soul (urchins, hell)
There may be some that I missed.

If you get both the Widow and Docks very high (30, I think), you can get a very profitable one that pays out is POSI items.

Police 50 and Criminal Favors 7 is also there, in the high end of conflict cards. I have not seen it yet, though, since I don’t have Police 50…

This wiki page has all of them here if you ever need a quick reference.

It also has a neat inforgraphic which is really helpful when trying to trim your deck! 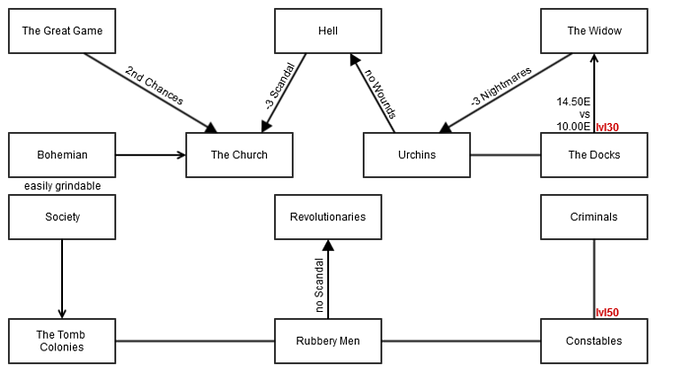