This is a thread to discuss the Recurring Dreams storylines. I myself find them fascinating, as all dreams are. Post your interpretations, theories as to how they relate to the rest of the story, anything interesting you think of, really!

My contribution is pretty minor for now, but: Has anyone else noticed that four of the six storylines seem to correspond to the four Classical elements? The Fire Sermon is obviously fire, and Death By Water is obviously water. What the Thunder Said relates to the air and wind, while The Burial of the Dead talks a lot about the earth. Is Someone There? may even correspond to the fifth element, aether, since it seems to have a connection to the Mirror-Marches, a very strange and dreamlike world. This might also explain why A Game of Chess is classified under “Dreaming Strange Dreams” rather than “Recurring Dreams”, since it doesn’t seem to correspond to an element.

(And also, a question to the developers, if I may be so bold: Can we expect something similar to Stormy-Eyed for the other dream storylines?)

It’s likely deliberate, but not the writers’ doing. 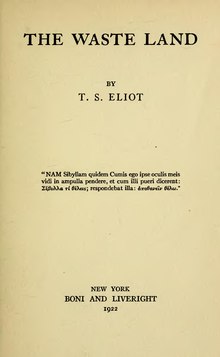 The Waste Land is a poem by T. S. Eliot,[A] widely regarded as one of the most important poems of the 20th century and a central work of modernist poetry. Published in 1922, the 434-line[B] poem first appeared in the United Kingdom in the October issue of Eliot's The Criterion and in the United States in the November issue of The Dial. It was published in book form in December 1922. Among its famous phrases are "April is the cruellest month", "I will show you fear in a handful of dust", and El...

I compiled a number of allusions from dreams, some time ago –

And I attempted a rougher concordance of phrases, images, and motives –

Neither became what they might have, but it does intrigue me to study the connections between dreams, that almost emerge into a pattern. I had not noted the elemental pattern before!
edited by theodor_gylden on 12/22/2011

This has probably been said before, but I believe the dreams are linked. I’m currently further along with What The Thunder Said than I am with any other dream, and have noticed references to that particular path in A Game Of Chess - and vice versa. (Not adding specifics at the moment, in case of spoilers, but may go into more detail via spoiler tags when I have time to write a properly analytic post.)

I believe there is a much bigger story being crafted by these dreams, though what (if anything) it has to do with the nature of Fallen London and the Bazaar, I have no idea.

Oh, definitely. I’m far along in many of the dreams, and I am definitely noticing recurring imagery and settings, even without counting the branches that explicitly link to another of the storylines.