Changes in the Tombs

'In celebration of the Feast of the Rose I went on stroll with my beloved. Alas, Society was not yet ready for our tentacled love and I was forced to flee to the Tomb Colonies.

Once there I was shocked, simply shocked to see that things had changed since my last visitation. 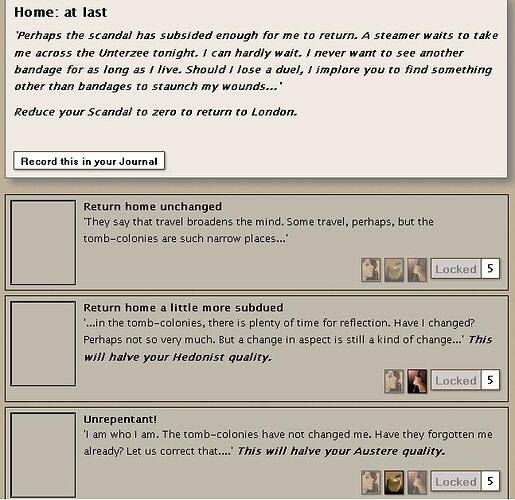 Other changes having nothing to do with the construction of their Grand Sanatorium were in evidence as well. One can only wonder if the Masters had a hand in this and what other changes have occurred as well…’

Great googly moogly, a post that isn’t about the Feast (at least, not entirely)!

This is interesting. Are there any ways to change hedonist/austere in Exile now?

Oh my - what levels of hedonist and austere do you need for those and is there a way to increase them in the Tomb Colonies if you haven’t got enough. Or a way to get out without those quirks.

You’ll fit at least one of the options, though you may not want to. I know at least one of our members here is a ridiculously hedonistic gentleman. Thought I would give a heads up.

So far I’ve seen additional options on every opportunity card I’ve come across. Haven’t been through them all yet though. Think I saw a couple that increased Austere or Hedonist, was mainly intrigued by the new content and not looking at how my stats changed. It is still a place of exile but your path is no longer a linear one.
edited by Endy on 2/14/2014

My alt actually came back from the Colonies yesterday, I didn’t know it was new content! As Endy said I think they changed several of the opportunity cards you can encounter. Usually they give two options, one that decreases scandal but gives austere (and eventually removes hedonist) and another that has the opposite effect (plus gives you something, usually) but increases scandal and thus your permanence at the Colonies.
I think you have to go to the Colonies with a lot of hedonist already, in order to be able to access the “Unrepentant” option.

I saw that the other day, but it had been so long since my last exile I thought it was old news…!

i do not enjoy taking 5 actions to get out of the tombs, but this does allow one to stay in the tombs longer(terrible thought!) to buy connections to revolutionaries or use the cards to increase tomb-colonists connections.

the TC connection quality isn’t quite as useful revolutionaries though. and you probably won’t want to buy connections to society or church since they can be increased in many other ways?

[quote=OPG]Great googly moogly, a post that isn’t about the Feast (at least, not entirely)!

This is interesting. Are there any ways to change hedonist/austere in Exile now?[/quote]

Unless, of course, this was all done in preparation for all the scandal we’re going to create over the course of the Feast.

Entry to Prison has also changed - you now get a Criminal Record!

All the images for all the new options seem to be broken. A lot of cards that were once autofire now have options.

All the images for all the new options seem to be broken. A lot of cards that were once autofire now have options.

[quote=MidnightVoyager]All the images for all the new options seem to be broken. A lot of cards that were once autofire now have options.[/quote][color=#C2B280]The lack of images on the new branches is a known issue. It will take a little time to fix – please bear with us for now.[/color]

Ah, good to know! It’s nice to have options, though. I didn’t like just always shrinking away from the tomb colonist lady.

i’m guessing your hedonism was too high? didn’t increase my scandal when i left with a moderate amount of hedonism and austere.